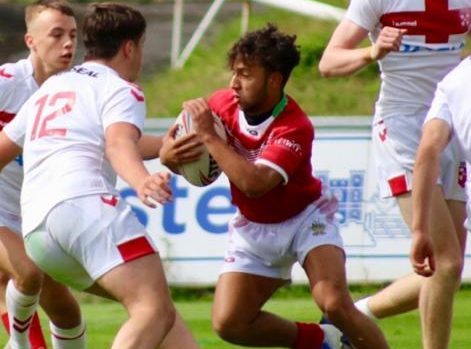 He’s also been playing at Wigan St Judes since U9s and during his time at the club, he was coached by people like Mark Freeman, plus the former Wales men’s international Dave Whittle. It was while he was playing for the Wigan club that he was selected for Wales U16 by head coach Lee Crooks, playing against England in 2019.

Pinder joins his Wales U16 team-mate, Kyle Huish, who is a year older, at the Warriors U19 set-up.

Crooks said: “Lewis came into the squad as a 15 year old and had a background in rugby league which always helps. This is something that Gareth Kear is looking to put in place, so all players in Wales can play and train at a higher level on a more regular basis to help them develop!

“Lewis stood out for a number of reasons, but his pace and ability to recognise and react to different situations put him in front of other players. He was a very coachable lad and I hope he goes a long way in the game.”

“His signing really shows how the North Wales pathway is working and demonstrates to the current and any future players with similar aspirations that you can achieve your dream.

“This fantastic news provides everyone involved with huge satisfaction. We hope this is the start of many more signings of players from Wrexham and the wider North Wales region.”