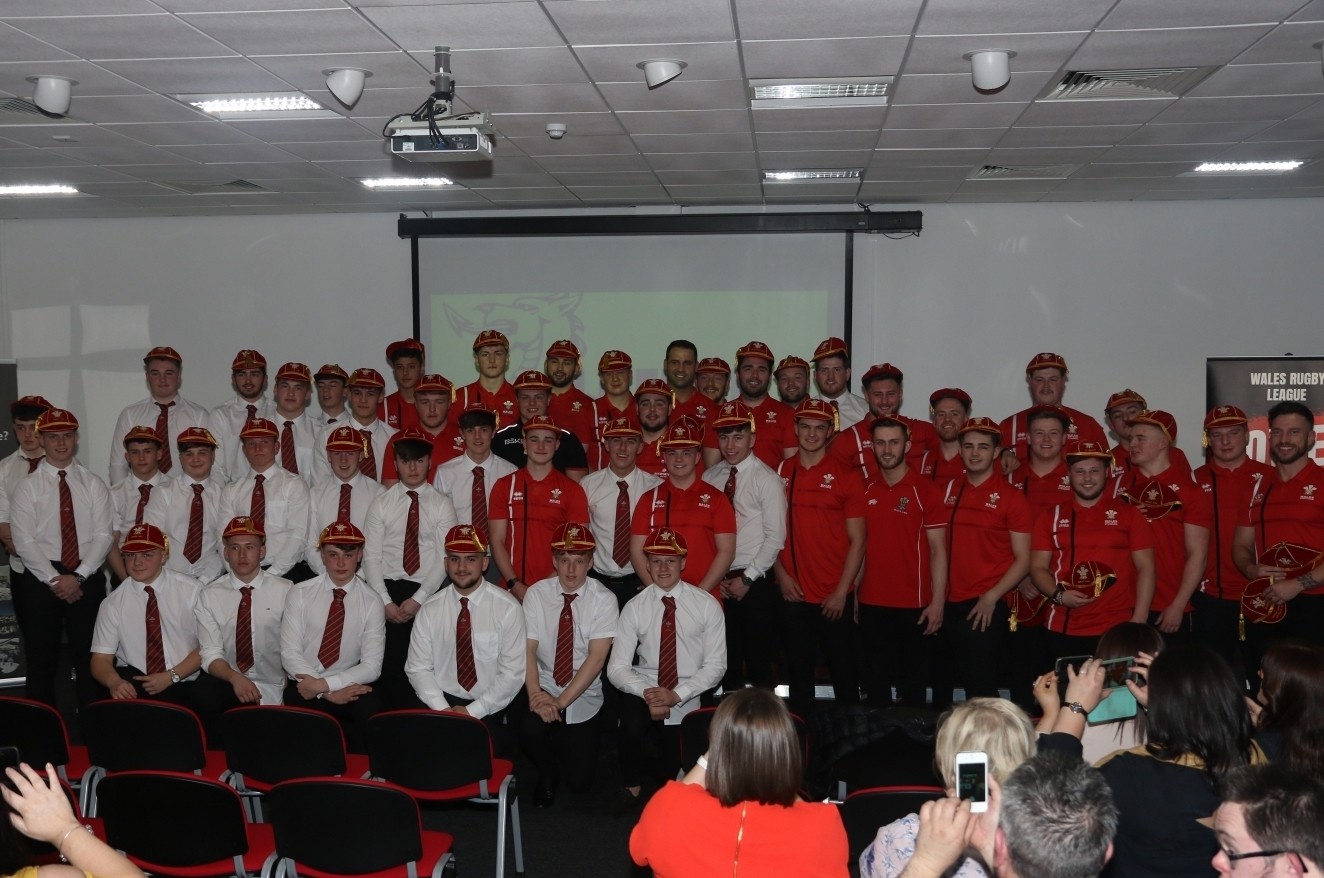 Wales Rugby League held their annual cap presentation night at the University of South Wales on Saturday evening where almost 100 regional and international caps were handed out to players who took to the field in 2017.

First the players who took part in the annual East v West Wales games were rewarded.

East Wales won the lone game at senior level but West took the spoils at junior level in the under 17s encounter in Cardiff and in the two game under 15 series.

The West Wales caps were presented by West Wales Raiders chairman Andrew Thorne with Wales Rugby League CEO Chris Thair presented those to the players from the East.

The second part of the night saw players from Wales Dragonhearts, Wales under 18, under 16 and Students being recognised.

Wales Dragonhearts narrowly lost to Germany in their only game in 2017, the under 18s competed well against England Lions in their only match, the Students travelled to the World Cup in Australia and recorded a win over Ireland, and the under 16s won three games out of three.

Special guest for the evening, Chris Seldon, who had only 18 months ago received his Welsh cap for his two international appearances in 1980, presented all of the international caps.

Seldon played rugby league for St Helens and Cardiff City Blue Dragons at club level after moving north from Pontypridd where he is still considered to be the toughest player in their history.

He said: “Thank you for inviting me and it was an honour to present the young players with their international caps and welcome all the players into the Wales Rugby League family.

“There’s a wealth of talent here in Wales, not just at junior and student level, but how brilliant is it to have a Wales Rugby League Wheelchair team, I think that’s superb. As an ex-soldier, a lot of people I know have had legs and arms injured in conflict so anything to help them play sport in fantastic.

“Congratulations to everyone who played for Wales in 2017.”

The hundreds in attendance watched a video produced by Wales under 16 coach Jason Seddon, documenting his side’s three-match unbeaten campaign last year which culminated in Wales’ first ever win over England at under 16 level.

Seddon said: “Whenever you get to this level and play internationally then it’s a massive achievement. Results are great when you’re winning but to actually compete at this level and be a part of very special is something you’ll remember for the rest of your life.

“But particularly for me, to see the group on under 16s players along with the families who supported them throughout the year, is pretty special. We have a very talented group of players and people have taken notice this year of what Wales have to offer rugby league. There’s an emmense amount of talent here, not just in the squad who are now going through Super League, but the depth of talent we have in Wales is considerable. To go out there and beat England for the first time and to perform well when doing it, to beat Ireland twice as well, is an unbelievable achievement.

“And this is just the start. Getting it right at youth level puts a fantastic foundation in place for Rugby League in Wales. It generates a lot of interest and gives a lot of people the aspiration to get to the level that these lads have go to. It’s been a great experience for all of us involved with the team.

“Yes it’s great to have success on the field but we were there to develop players and it was wonderful to have a group that was so willing to learn. We developed those players throughout the camps and games and I’m very confident we’ll see some of them in Super League and other levels of Rugby League in the future.

“I’m confident we’ll be very strong at under 16s this year but we need other people to get on board with what we’re doing. If we get it right at 16s, we can get it right at 18s or 19s and then at Dragonhearts, Students and first team.”

“It was a very busy year for international rugby league last year,” he said. “I went with Wales men’s side to the World Cup in Papua New Guinea and it was unbelievable, the guys were treated like rock stars and everywhere we went on the bus, we were mobbed.

“That was their dream for those player but dreams happen elsewhere as well.

“The Wales Wheelchair team travelled to France for their World Cup and there are some very proud Welshmen in that side. Wales Students did the same going to Australia for the Student World Cup.

“Wales under 18s had a fantastic game against England and brought back some pride to that jersey from the year before.

“However the outstanding programme of the year was the Wales under 16 side beating England for the first time ever, and from that set of 14-16 year olds, 22 players are now signed with Super League clubs and this unprecedented – the year before it was two.

“We’re doing some outstanding things and dreams are happening. Over the last 12 months we’ve sent three Wales sides to Australia and one to France. The Wales under 19 side are going to Serbia in a few months’ time.

“These are things sport brings you – it makes your dreams happen and gives you wonderful experiences and you make some great friends.

“The most memorable moments for me are after the internationals when you see all the friends and relatives on the pitch taking photos of their sons in their Wales jerseys, that’s a massive moment for every family, to see how proud they are when their son wears the red shirt and the three feathers. Thank you to all families for all your support and making the players’ dreams happen.”

To purchase any photos from the night, please email ian@ianlovell.com.