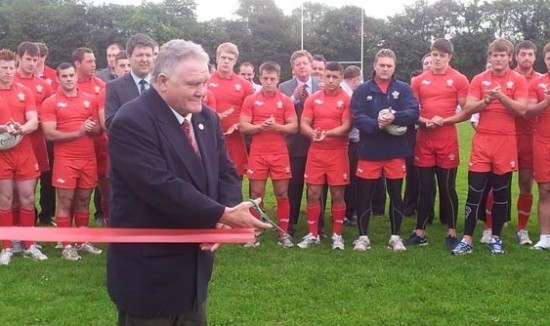 High performance Rugby League is coming to Deeside, thanks to a unique partnership between Flintshire County Council and Wales Rugby League.

Wales’ fastest growing sport now has a permanent home at Deeside Leisure Centre for its International team and North Wales Crusaders Academy squads. The development at the centre has witnessed the creation of an elite strength and conditioning gym which will include a range of weights and a combat zone, a dedicated Rugby League pitch, and the support from the centre off the pitch which will help the teams thrive on it.

“Having the Wales Internationals training here is a privilege and something we hope to accommodate on many other occasions. This will undoubtedly help us increase participation in our proposed touch Rugby leagues and U18s regional team as well as show case all of our new facilities at Deeside Leisure Centre, including our Extreme, Gym, 3G pitches and the first public day spa in Wales – Afon Spa.”

Jeff Shields, Facility Manager at Deeside Leisure Centre said, ”The management team and staff here at Deeside Leisure Centre are extremely proud of our partnership with Wales Rugby League and have been impressed with their vision and aspirations to get every child hooked on sport. We feel that it is yet another new development which will help us to raise the standard of Leisure provision and diversity of leisure opportunities for the people of Flintshire. “

This development has come at the right time for Wales Rugby League with the North Wales Under 18’s taking part in the Heinz Big Soup conference division and the National team gearing up for this year’s internationals and the forthcoming World Cup.

Wales head coach Iestyn Harris said: “Wales Rugby League consider North Wales as an important area and we are delighted to have created a partnership with Deeside Leisure Centre and to have Deeside as one of Wales Rugby League’s elite performance centres.

“Our dedication and hard work continues in all areas of Wales but to have a facility of this quality leading into a World Cup year is a big plus for us.”

Wales Rugby League President Mike Nicholas said: “I am delighted to be officially opening the new Welsh Rugby League Performance Centre. To have a base like this in Wales is something that we have strived for for a long time. I’d like to thank everyone at Deeside Leisure Centre and Flintshire County Council for everything that they have done for us so far and we at Wales Rugby League look forward to a long partnership.”

The launch day also provided the opportunity for school children and public to watch the Wales team train, followed by a primary school tournament which will see the winners play at half time on the Racecourse Pitch during the international against France.

Matt Hayes, Sports Development Manager said, ”The project has been funded through sponsorship and a Sport Wales Development grant, and although primarily established for Rugby League we have already had discussions with other Governing Bodies of Sport who are interested in using the gym facilities”

Rugby League has received a further boost in the Flintshire area with the creation of an open age group team, the Flintshire Falcons, who will be competing in the North Wales Conference this Summer and with firm plans for a Rugby League schools Roadshow prior to this Autumn’s international with England.