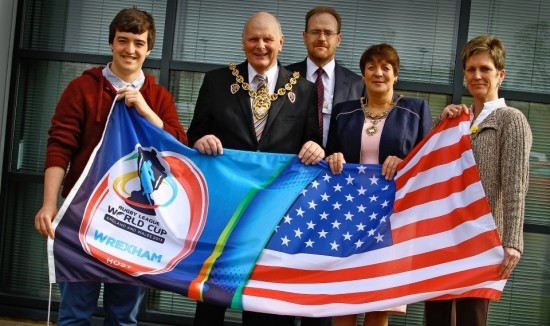 Jacqui Walker and Liam Partyn will represent Wrexham and its district on the Fans Local Advisory Group (FLAG) and will have a say in how the tournament is run, and they have asked North Wales Crusaders to assist them in looking for feedback from the fans.

FLAG has been created in order to promote the event and stimulate local interest and to give fans a voice in the planning of the Rugby League World Cup 2013, recruiting representatives from all the communities hosting games.

Walker is a big North Wales Crusaders fan and is heavily involved with the community side of the game in Wrexham. She is a qualified Level 1 coach at the Wrexham Bradley Raiders rugby league club and is honoured to have been selected.

“The profile of rugby league has accelerated rapidly around Wrexham and North Wales recently,” she said. “The upcoming 2013 World Cup will evoke even more passion for this truly family oriented sport.

“It has given our family a common interest and brought us closer together and I am thrilled to be part of next year’s exciting tournament.”

Partyn is currently at Deeside College studying for a diploma in Sports Science and is also a season ticket holder at the North Wales Crusaders.

“I’ve only been watching Rugby League for few years now, but already it is an important thing in my life,” he said.

“With the town hosting both a group game and quarter final this is a great opportunity to see the best rugby league players in the world on our doorstep and showcase Wrexham on the world stage.”

Lawrence Isted, Head of Community Wellbeing and Development said: “Both Liam and Jacqui are both incredibly passionate and knowledgeable about the game and will have an important role to play in planning the tournament at both a local and national level. FLAG will provide fans with a genuine platform to influence the creation of the best Rugby League World Cup in history. Supporter involvement was a key element of our successful bid and we could not have asked for two better people to represent Wrexham at the 2013 Rugby League World Cup.”

In the 2013 tournament, Wrexham will host the USA team, nicknamed the ‘Tomahawks’, who compete in the Rugby League World Cup for the first time after defeating both Jamaica and South Africa to qualify for the competition.

Wrexham’s famous Glyndŵr University Racecourse Stadium will play host to Wales v USA in group D as well as staging a quarter final match in the competition. The group D fixture will mark the third time that the sides have met. They previously played each other twice in Philadelphia in June 1995, where Wales were 66-10 and 92-4 winners.

Plans are already well advanced and the event promises to be a fantastic spectacle for rugby fans everywhere. From Limerick to Perpignan, from Wigan to Bristol and Neath, and all areas in between, fans will not have far to travel to watch a match. In fact, upwards of half a million people are expected to watch the 28 matches live over a six-week period in the autumn of 2013, with a further 20 million viewers from 120 countries tuning in around the world.

FLAG will meet regularly with tournament organisers to share and discuss their views and will be encouraged to maintain a regular dialogue through social media.

But for FLAG to function efficiently, the views and input from fans are a necessity. So what do YOU want from the tournament? What would be YOUR suggestions to make the event a success? What would encourage YOU to attend a game; not just the final, but one of the many Group matches?

We all hear about the ‘Rugby World Cup’, so let’s promote RLWC2013 as ‘the’ Rugby World Cup and make it an event to remember and put North Wales on the international sporting map.