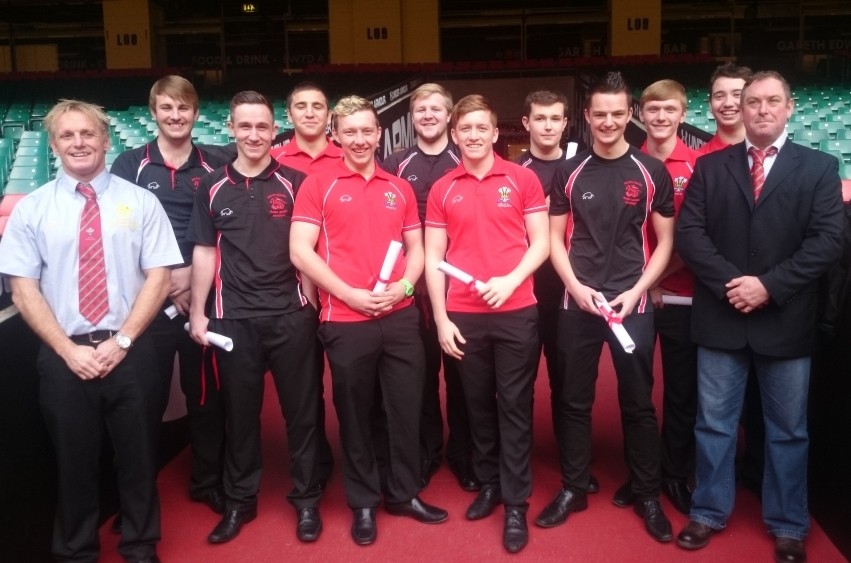 The programme was set up in September 2013 to help boost the Rugby League player pathway structures in South Wales and has shown to be a great success.

Over the course of a year, they received daily rugby league coaching and education in the Maesteg School Sixth Form, as well as delivering training to other pupils in the school and to those in local primary schools.

And the results of this programme can already been seen. One student, Regan Grace, has already been signed by Super League club St Helens, while three, Zak Williams, Ben Jones and Daniel Maiden, are currently training with the South Wales Scorpions first team ahead of the 2015 season.

Wales Rugby League’s Head of Performance, Jon Ellis, coached them throughout the programme.

He said: “The AASE programme has been a great foundation for the students in Rugby League. To have a number of players in Wales totally immersed in the sport on a 24/7 basis has been immense with regards to how a professional Rugby League player is expected to apply himself in his daily routine throughout the players career.

“This course has improved the players perception of the sport and has encouraged them to perceive and evaluate their own pathways within the sport enabling the students to make real decisions in their progression pathways be it as a player or in some other role within the sport be it media physiotherapy or analysis.

“Understanding the game of Rugby League for the majority of the players has been a steep learning curve. Being coached correctly by Wales and Wigan staff has helped the students to understand and further improve aspects of their game, playing regularly has improved the students own personal abilities, and with coaches who are former players always at hand, they have picked their brains and gained first-hand knowledge.

“AASE has been a success away from the learning environment too as many players have been selected to play for their country, some represented the Wales Commonwealth team winning a bronze medal and some have signed professional contracts at Super League and League 1 level so all in all the programme has achieved what it set out to do.

“I would like to thank our partners for helping us achieve this success – Skillsactive, European Social Fund, Welsh Assembly, Coleg y Cymoedd, Maesteg Comprehensive School, Innoved and Wigan Warriors RLFC – and also the families of the players who supported them throughout. Some of the players had to make huge sacrifices and move to Maesteg in order to be a part of the programme which showed their level of commitment.

“Congratulations to all the students and I wish them the very best in the future.”

WRL’s National Development Manager, Mark Jones, said: “For the first time in WRL history, the AASE programme has allowed young Wales Rugby League players the opportunity to study their game at the highest level whilst reflecting upon their continuous development.

“The programme helped support the Rugby League development pathway in Wales, and has given the apprentices the best possible opportunity to achieve their goal of becoming a professional Rugby League player.

“The education credits that they have also gained on the AASE programme allow the apprentices to apply for university if they wish to progress down this route.

“The programme has also benefited Wales Rugby League as an organisation as it has helped to educate our staff and continually up skill the work force through experiences and partnership support.

“I would like to give a huge thank you to Jon Ellis, Harrison Elliott and Coleg Y Cymoedd for their continual help to deliver the course. Without their hard work the apprentices would not have had the excellent experience and would not have passed the course.

Wales Rugby League are now preparing for a new intake of students to start a new AASE programme from September 2015.