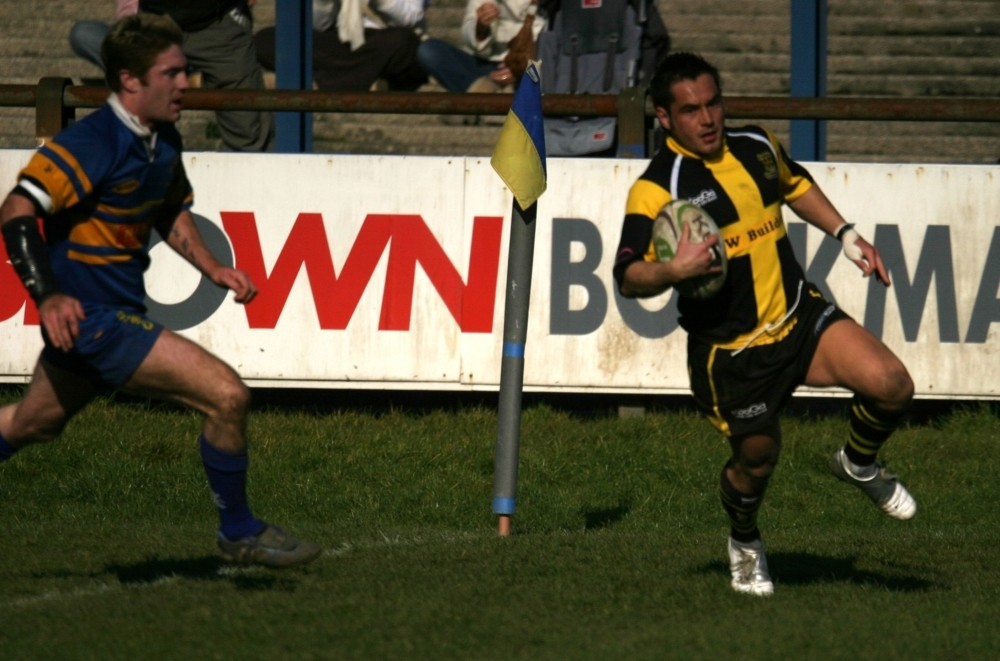 Paul, who hailed from Pencoed near Bridgend, leaves a wife Heidi, two sons Tyler and Harry and daughter Maddison.

After playing for Pencoed at youth levels, he made his break in first class rugby union in 1995 when studying at Brunel University in London turning out for London Welsh.

On moving back to Wales in 1999 he signed for Whitland before making his Welsh Premiership debut with Aberavon in 2000 when he made a two-try debut against Walsall at the Talbot Athletic Ground on 20th August.

He played regularly until his last game against Neath at the Gnoll on 15/9/2004, that being his 91st appearance. He scored 30 tries and had a brief spell at Llanharan in 2002.

In 2003 he tried his hand at rugby league due to the Wizards’ link with new Welsh Conference side Aberavon Fighting Irish and in 2004 won his first Wales Dragonhearts (the A side in Wales Rugby League) cap.

He joined rivals Bridgend Blue Bulls RLFC in 2005 and scored a hat-trick of tries in their Harry Jepson Trophy Final at the end of the season. This, and his performances throughout the year, earned him selection for the full Wales side, winning two caps – the first against Ireland in Dublin and the second against France in the 2005 Rugby League European Cup Final in Carcassonne.

He was then snapped up for the first ever Celtic Crusaders squad in 2006. He made 30 appearances on the wing scoring 16 tries, but departed before the 2007 campaign.

However his affiliation with rugby league didn’t end there. He returned to Bridgend Blue Bulls and won more Dragonhearts caps up until 2009, while in 2013 he helped to organise the main shirt sponsorship of South Wales Scorpions RLFC.

Before his Crusaders spell, he played eight games with Maesteg at the start of their 2005-06 season and following his year in professional rugby league, he spent a year at Bridgend Ravens then went back to his local club Pencoed, playing union in the winter and league in the summer for a further three years.

In 2009, he moved into coaching and spent two years each with Neath Athletic and Aberavon Quins.

He was also a keen cricketer and played for a number of years at Pencoed Cricket Club, recently as captain.

Paul was loved by all in the Welsh sporting community. He is the first Celtic Crusaders first team player from the club’s six year history to lose his life.

“I am extremely saddened by the tragic news about Paul’s death. He was an excellent servant of Aberavon RFC and a key player during a highly successful period in the club’s history. His time in Rugby League saw him win two full caps for his country and help the Celtic Crusaders achieve an unprecedented rise to Super League status. He could talk a glass eye to sleep and was the ultimate optimist; someone who always saw that the glass was half full and never half empty. He will be badly missed by his family, his colleagues, former team mates, and many friends.” – Chris O’Callaghan – former chief executive of both Aberavon Wizards RFC and Celtic Crusaders RLFC.

“Had the great pleasure of knowing you as a friend, coach, player and as your skipper. Always wanted to play rugby the right way that resulted in Nathan Flynn and I used all his moves down Aberavon Greenstars. Never one to shy away from voicing his opinion, even if it wasn’t what people wanted to hear, hence the fact we got on so well! His passion about winning resulted in him being misunderstood! Winning Sexy was the only option.” – James Davies, former team-mate at Aberavon Quins RFC and Aberavon Fighting Irish RLFC.

“I’m devastated about the news to be honest. Having known Paul (and his family, especially his Mum and Dad) since he was a youngster coming through the ranks at Pencoed, he will be missed by all who knew him. A great trainer, a great player and a great bloke. Thoughts are with Heidi and the rest of the family at this tough time.” – Wayne Hall, friend and Team Manager at Bridgend Ravens RFC.

“He was always a character, sometimes a show off but had heart of gold and always gave 100% for every team he played with. Simply a lovely guy who lit up the dressing room.” – Simon Green, former colleague from Bridgend Blue Bulls RLFC.

“Devastating news, all the players and members of Neath Athletic RFC, would like to offer our condolences to Paul’s family. A talented player and coach and also a top bloke. Our thoughts are with his family at this very sad time. RIP Paul” – Mark Thomas, former colleague from Neath Athletic RFC.

“So sad to hear of the passing of my mate Paul Morgan – my first house mate in Wales. Took me in and showed me the ropes. Great bloke, great sense of humour. RIP butt !!” – Chris Beasley, former team-mate at Celtic Crusaders RLFC.

“It was a shock to hear the news of Paul Morgan (Pencoed cricket captain) passing. Words cannot express my sadness, beautiful memories with you in the field! RIP – Thasan Subramaniam, former team-mate at Pencoed Cricket.

“On behalf of Pencoed cricket, my condolences go to Paul’s family and friends. We had some great times together on the field. RIP Paul, Love from all his cricket family!” – Layton Williams, Pencoed Cricket Club.

“So sorry to hear the terrible news. My condolences to the family. A big character for Wales Rugby League. It was a pleasure to work with Paul. RIP” – Wayne Williams, his former coach with Wales Dragonhearts RL.

“Absolutely gutted to hear the news about Paul Morgan. It was a privilege to play alongside him with the Bulls, Crusaders and Maesteg. Another top bloke taken too young. Thoughts are with his family. RIP mate.” – Hywel Davies, fellow former Wales Rugby League international.

“Very sad news about my mate and team mate in various sides Paul Morgan. Take stock of what you have and try not to moan about trivial things, more important things in life.” – Lenny Woodard, played alongside him with Aberavon Wizards, London Welsh, Bridgend Blue Bulls, Celtic Crusaders and Wales RL.