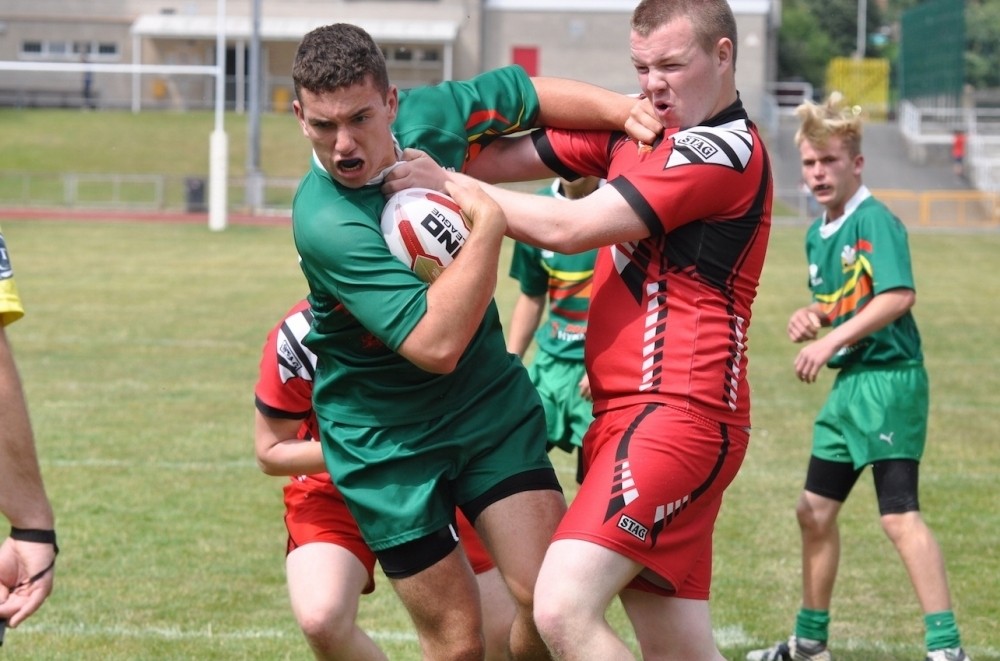 The final scoreline doesn’t do the performance of the young Crusaders any justice, as they lost to a decent Wigan-based Shevington side.

A poor spell just after half-time cost North Wales dearly and allowed the Sharks to put the game beyond any hope of a comeback.

Shevington, who play one division higher than Crusaders, made a very nervy start to the game, as the Welsh side’s defence forced both errors and penalties out of the Sharks.

However, Crusaders could not make plenty of possession and field position count on the scoreboard and, in fairness, the Sharks defended stoutly and did not panic under constant pressure.

In the second quarter, the Sharks did get some possession and built up an 18-0 lead with some clinical finishing of their chances.

Just on half time, Crusaders got the score their play deserved, as loose-forward Connor Hinchcliffe hit a great line off a short pass to break the Sharks defensive line to score. The conversion was missed to leave the half time score at 18-4 to the Sharks.

The second-half started very similar to the first, with Crusaders pushing hard on the Sharks line.

A rare defensive error from the Sharks allowed Crusaders halfback Matty Allen to scoop up a loose ball and show great footwork, along with strength and determination, to cross the try line. Fullback Morgan Johnson added the extras to narrow the deficit to 18-10.

There then followed a 15-minute spell where the Sharks took control of the game, scoring four unanswered tries to lead 40-10 and, effectively, take the game away from Crusaders.

To their great credit, the young Crusaders forced their way back into the game and scored the best try of the game, as they shifted the ball from right to left through four pairs of hands to give fullback Morgan Johnson enough time and space to cross for a splendid team try wide on the left. Johnson improved his own try to make the score 40-16 to the Sharks.

Crusaders continued to press hard in the final 5 minutes again forcing errors from the Sharks, but they could not break the Sharks defence, which had been first class throughout the game.

Loose-forward Connor Hinchcliffe had a huge game for Crusaders and was well-supported by props Morgan Shaw and Brandon Williams, along with hookers Shane Russell and Callum Hughes.

Centre Alfie Matthias, halfback Izzak Morgan and fullback Morgan Johnson were also well to the fore in what was a real good team effort.

Coach Allen Jones was happy with the performance but disappointed with the scoreboard.

“We actually played pretty well for large parts of the game”, Jones said.

“A real poor spell just after we got ourselves back into the game cost us very dearly.

“We then regained our composure and finished the game really strongly.

“However, the big difference was in the tackle area, where the Sharks got big numbers into each tackle and slowed our attacks down.

“We actually tackled really well and did not miss many tackles; we just did not get enough bodies into the tackle to slow down the Sharks attacks.

“It has been another great season for this group of boys.

“Following on from promotion last year, we will finish third in our new division and have reached a cup final, which isn’t bad for a relatively new team.”

The boys have now completed their fixtures for 2015 and will get a little down time before returning to winter training in late October.