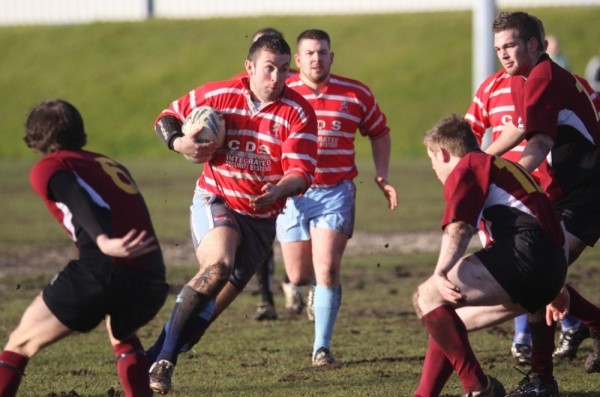 By Ian Golden at Cyncoed Stadium

Witnessed by a large crowd at UWIC’s Cyncoed Stadium, the Welsh derby in the preliminary round of the Carnegie Challenge Cup turned into a classic as Valley Cougars held on for a narrow 20-18 win.

The Welsh champions now travel to Portsmouth next Sunday to face the Royal Navy in the First Round proper.

With Celtic Crusaders players on each side, the game had a State of Origin mate versus mate feel about it as arguably the two best non-professional sides in Wales served up an entertaining game which Valley Cougars should have sewn up earlier than the did. They won the match by five tries to three but the scoreline was just two points in their favour after they failed to land a single conversion, compared to UWIC’s Lloyd White who, as expected, had a 100% kicking record.

The match was as tough as expected with defences ruling, especially in the first half. Chances were hard to come by, mainly thanks to a horribly muddy playing surface caused by ice, rain, sleet and the rucks and mauls from the many rugby union matches that normally grace the pitch.

Cougars took the lead in the fourth minute. From a scrum, Lee Williams laid off to Mark Jones who set up Gary Williams to go over.

The score doubled to 8-0 on ten minutes after Ashley Bateman leaped onto a Lee Williams grubber in the corner while Adrian Owen ran over in the same spot on 29 minutes to make the score 12-0.

Ross Bridgeman was closest to getting a try back for UWIC before the interval but was centimetres short when stretching for the line.

From the restart, Cougars worked their way upfield with Mark Powell scoring in the corner to make the half-time score 16-0.

UWIC had the chance to get on the board first in the second half but the strong Cougars backline kept them out. Lloyd White kicked a 40-20 and from the restart fed the ball to Gethin Evans who knocked on following a crunching tackle from Gary Williams.

However they did score their first try ten minutes into the second half after Ross Bridgeman twisted his way over the line and White converted.

Ashley Bateman restored the balance on 63 minutes with Cougars’ fifth try – again in the corner and again the conversion missed but UWIC struck back straight away through their useful half-back combination with White setting up Gethin Evans and White converting.

Paul Bartlett made it a nervous finish for the Cougars as he scored in the corner following fine work from Jon Trickey and Craig Foster and despite a final surge, the students couldn’t get that winning score.

Cougars’ chairman Mark Rowley was pleased at the win and is now looking forward to the trip to Portsmouth.

“It was a dramatic game and I’m pleased we held on for the win,” he said. “Our kicking could have cost us but thankfully all turned out well in the end. I’m proud of all the players out there though. We only had 16 men, had to register a couple of new players who hadn’t trained with us just before kick-off and still played like champions. We’re all looking forward to the Royal Navy game next week now and I’m sure that game will be another cracker.”

Gamestar: Lee Williams, who once again played like the professional that he is, masterminding a number of the attacks.
Gamebreaker: Cougars’ defence in the last two minutes that kept out a strong UWIC final surge.