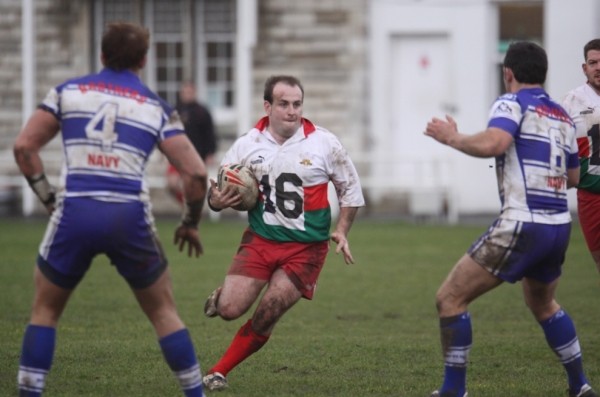 The Royal Navy sneaked into the second round of the Carnegie Challenge Cup on Sunday lunchtime after overcoming a second half surge by Valley Cougars to win 38-28 in an outstanding game of rugby league.

The Nelson-based side, most of whom had travelled down to Portsmouth the night before in preparation for the 11am kick-off, started the game in the ascendancy but once the forces side got into their stride, they built up a strong first half lead that ensured their qualification.

Both teams fielded good line-ups that contained international players. The Navy had were able to call on seven members of the heroic Great Britain Armed Forces side who won the Armed Forces World Cup last autumn, while the Cougars were able to call on a number of players who have turned out for Wales A and Crusaders Colts including full Wales internationist Gil Dudson.

The Navy had an early chance to take the lead but good work from forwards Mark Jones and Chris Holcombe stopped the attack, dragging Silivenusi Buinimasi into touch.

Cougars took the lead on nine minutes with an outstanding try from Gary Williams. The full-back kicked a high bomb from the Navy’s 20 metre line, ran through and caught the ball himself, placing it nicely to the right of the sticks. Neil Sloan’s kick made the score 6-0.

The Navy looked like they’d failed to get back into the game five minutes later after Dane Smallbone missed a penalty, but Welshman Jim Barnes picked up the loose ball after it was knocked on from the missed kick and grounded for a try. Smallbone’s kick went in off the right side of the post and the scores were level.

Cougars attempted to get on the board again and were close to the line for almost an entire set of six but the strong Navy defence kept them out.

The home side took the lead for the first time from a slick move straight after they regained possession. Working their way upfield nicely, when they were close to the line, Barnes slipped the ball back to Smallbone who ran through the gap, converting his own try.

The Welsh defence did well to stop Buinimasi who was searching for a third Navy try but from a scrum, they couldn’t hold back McCoy Turner who darted over from close range. Smallbone again added the extras.

The Navy dominated the rest of the half. Tom Boyce ran in for their fourth try four minutes later before scoring his second five minutes before the interval while loose forward Danny Johnson waltzed through just before the hooter. Two more successful kicks from Smallbone meant the Navy were going into the dressing rooms with a 28-point lead.

They started where they left off after the interval after Barnes dived over for his second from their first set.

But the Cougars refused to lie down and staged a mini revival. They finally got back into the game on 51 minutes when Chris Holcombe went over following a fine passing move that involved Ryan James, Sean Wigfore and Ben Thomas.

And five minutes later they scored again. Mark Jones was stopped short of the line but from the play-the-ball, Ryan James dived over. Paul Emmanuelli converted.

Suddenly the revival started getting serious. This time Ryan James was the creator, opening up a gap for James Allen who weaved past the remaining back-line to score under the sticks. Emmanuelli’s goal brought the score back to 38-22.

Then the heavens opened which signalled the end of the Cougars’ fightback along in addition to much chance of seeing any more attractive play as the conditions worsened with ball control suffering as a result.

Both sides attempted to get further scores on the board. Richard Metcalfe was denied after receiving a forward pass, while Liam Williams was blocked as he went for a further Cougars try.

However there was just enough time for one final try, to the Cougars, after Neil Sloan leapt on an Emmanuelli grubber with the half-back converting.

Gamestar: Dane Smallbone – kicked well and used his vision to exploit Cougars’ gaps in the first half.
Gamebreaker: Jim Barnes’ try just after the interval made the gap far too big for the Welshmen despite their spirited comeback.