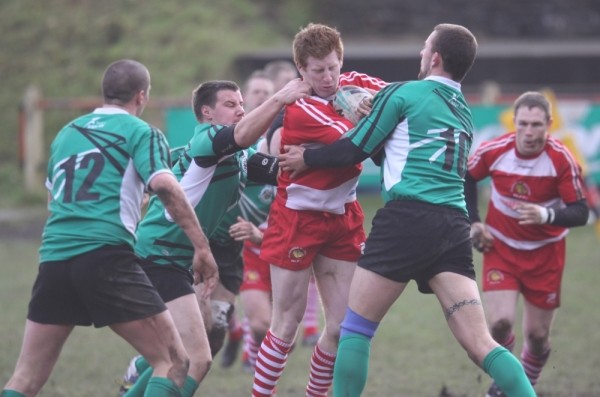 By Mark Harris at Blackwood RFC

A second half blitz from the Blackwood Bulldogs saw them past Edge Hill University into the next round of the Carnegie Challenge Cup in a game that was far more closely contested than the score line would suggest.

The pitch was still damp underfoot as a result of the recent rain and snow and contributed to a number of errors as the teams tested each others defences in the early part of the game.

At the fifteen minute mark Blackwood picked up the first score. Jeremy Lloyd placed a deft kick over the top which was picked up by Byron Williams and quickly swung out to the right for Trevor James to pick up his first of the day.

Five minutes later James got his second. Edge Hill were camped on the Blackwood line but a loose pass from David Rolt was intercepted by James who ran the full length of the pitch to double his tally. Gareth Price added the extras to make the score 10-0.

On Edge Hills next set they knocked on at the half way line and Blackwood capitalised with some great handing which was finished off as Byron Williams dived over for the try. Price goaled again to give the Bulldogs a 16-0 lead.

As Edge Hill tired Blackwood pressed the self destruct button giving away series of penalties putting them on their own five yard line. Edge him took full advantage as loose forward Thomas Whitehead barged over at 35 minutes and Daniel Dyke converted to make the score 16-6 at the break.

Edge Hill opted not to go into the changing rooms at half time and they were certainly the first team on the pitch as the second began. Five minutes of constant pressure paid off when they picked up the ball at the half way line and blasted through the Bulldogs defence with Jake Greenwood touching down. Martyn Greaves goaled to reduce the deficit to four points.

A minute later David Rolt crossed the line again for Edge Hill but a forward pass chalked off the score and this appeared to be the turning point of the game as the balance of power began to swing in Blackwood’s favour.

At 55 minutes Blackwood began a fifteen minute demolition of their opponents which began with three back to back tries. One from each winger Aaron Humphries and David James followed by a piece of individual brilliance as Kristian Perry, who ran from his own half, dodged every tackle Edge Hill could throw at him as he danced untouched to score under the sticks. One conversion from Davies and another from Jeremy Lloyd gave the Bulldogs a convincing 32-12 lead.

Further tries from David James and Gareth Hucherson and a single Lloyd conversion finished the Blackwood scoring and a consolation try for Tom Robson at the death brought the final score to 42-16.