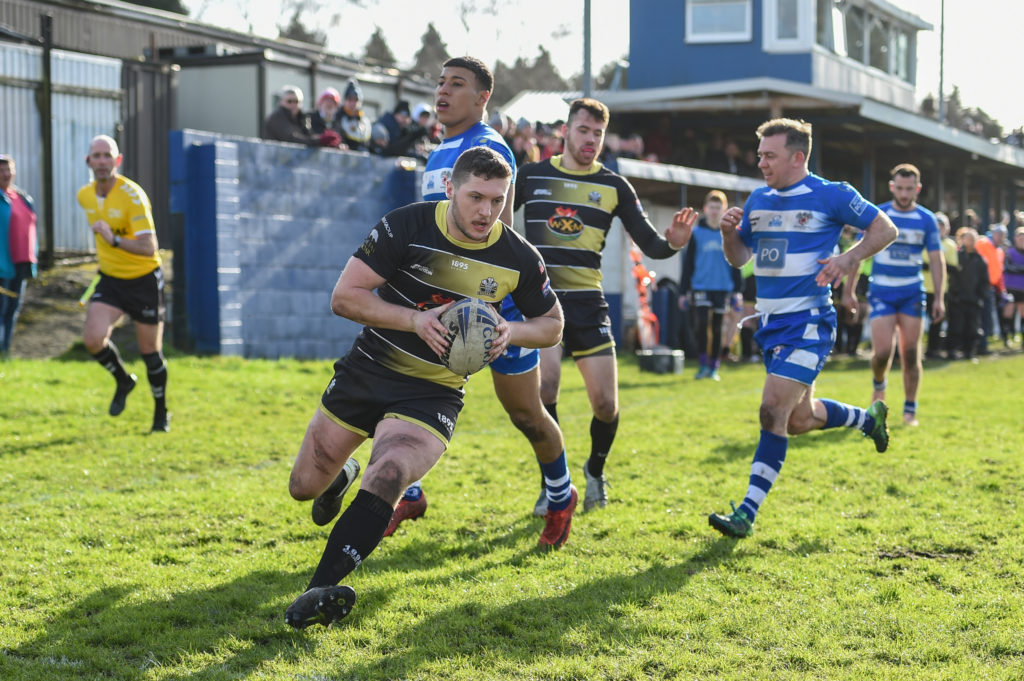 North Wales Crusaders ran riot in the second-half as they scored seven tries in a 16-minute spell to beat Rochdale Mayfield and book their place in the fourth round of the Challenge Cup.

Mayfield pushed Crusaders all the way in the first-half and would have felt unfortunate to find themselves 16-0 down at half-time.

But North Wales were ruthless in the second period, with Gav Rodden scoring three times after the break to add to his effort in the first-half.

North Wales did have their chances early on, particularly down the right edge, but the home side scrambled excellently in defence at times.

Crusaders’ pressure did tell eventually, though, as space opened up down the same flank for Jordy Gibson to put Gav Rodden over from close range.

With half-time fast approaching and it looking like Mayfield would trail by just four points, the visitors struck twice late on in what turned out to be a real sucker punch.

Jenkins then turned provider as a perfectly-weighted short ball put Kieran Sheratt in for a try underneath the sticks.

Rochdale continued to put up a good fight in the early stages of the second half, but North Wales extended their lead when Rob Massam profited from a loose pass to dive over in the left corner.

Mayfield responded instantly, though, as they regained the kick-off and forced a repeat set, with veteran Chris Hough scooting over from acting half.

But there was nothing the hosts could do as Crusaders ran riot in that impressive 16-minute spell.

Brad Billsborough forced his way over underneath the sticks, before Rodden collected a Rochdale error and showed plenty of pace to run the length of the field.

Jack Holmes, one of seven debutants for the away side, crossed for two tries in three minutes, taking advantage of acres of space down the right.

Rodden managed to grab his fourth with another length of the field effort, before Jenkins flung a delightful offload out to Massam, who collected on the wing to dot the ball down and complete the afternoon’s scoring.

Crusaders MOTM: Gav Rodden – playing in the semi-professional ranks for the first time in 2020, the second rower scored four tries on his competitive debut for Crusaders