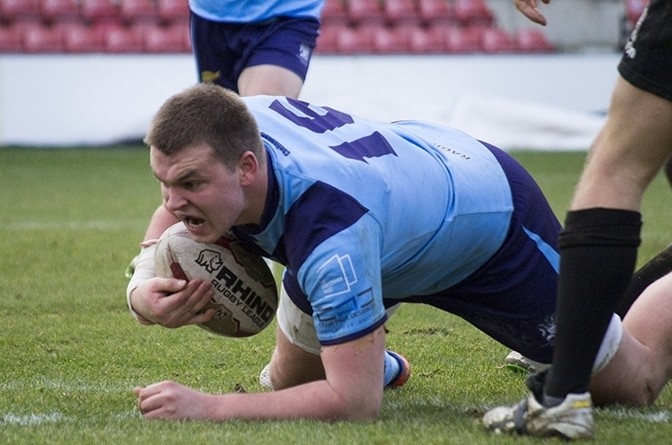 GLOUCESTERSHIRE ALL GOLDS came from 20 points behind to knock North Wales Crusaders out of the Ladbrokes Challenge Cup.

Trailing 36-16 with 25 minutes to go, it looked as though the margin was too big of a mountain to climb for the visitors.

However, they capitalised on a man advantage, after Stephen Wild’s sin-bin, and secured an unlikely victory.

Crusaders took the lead within the first couple of minutes through Scott Turner, who finished in the corner after a nice cut-out pass from Ryan Smith.

It didn’t take long for the hosts to build on their lead, as Jamie Dallimore spotted a gap in the All Golds defence and dummied his way to the line.

Then, Stephen Wild, collecting a lovely offload out the back from Ryan Duffy, went over for Crusaders’ third of the afternoon.

As North Wales were beginning to dominate, the All Golds turned the game on its head with three tries in 11 minutes to take the lead.

First, Jamie Murphy collected a high Courtney Davies kick to finish in the corner, before another Davies punt was dropped by Crusaders, which left Jonny Leather to gratefully collect and touch down.

The visitors went ahead for the first time in the match when Jayson Lambardo’s drilled grubber kick into Crusaders’ in-goal area was pounced on by Davies.

However, as Gloucestershire mounted a further attack, Jack Hansen intercepted a pass and that set up the field position for Jordan Andrade, who was on dual-registration from Salford Red Devils, to finish under the posts.

As they had in the first-half, Crusaders started the second-half well and Dallimore crossed for his second soon after the restart, dummying his way to the line.

He went over for his hat-trick soon after; in a similar effort, a show and go saw him through the All Golds’ defence and he did well to touch down on the line.

Rob Massam was the next home player to get over the line when he fended off numerous tackles on the flank to race clear and score in the corner.

At that point, Crusaders looked to have the game in the bag, but the visitors were soon back in the ascendency.

Harrison Elliott crashed over the line from close range, before Phil Cowburn did well to support a nice Brad Kislingbury break down the left.

Then, Courtney Davies, who caused endless issues for Crusaders throughout the afternoon, saw Jonny Leather in space and put in a fine kick for him to finish in the corner.

And, on the full-time hooter, the comeback was complete, as Steve Parry popped out a pass from acting half to Harry Kidd, who had the strength to force his way over the line.

Referee: Jamie Bloem
HT: 20-16
Attendance: 324
MOTM: Jamie Dallimore – scored a hat-trick, was outstanding throughout and didn’t deserve to be on the losing side.