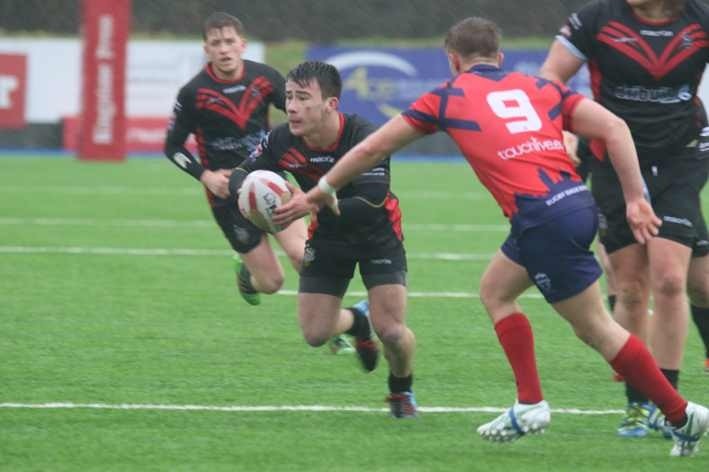 By Ian Golden at The Wern for Rugby Leaguer and League Express – www.totalrl.com

Exactly 107 years after the first Challenge Cup game in Merthyr Tydfil, the town held its second game in the famous old competition last Sunday and once again the away side were victorious.

On February 26th 1910, the Ironmen of yesteryear lost to Ebbw Vale’s Steelmen 12-7, however Merthyr did have two opportunities to stage a Challenge Cup home game in 1908, but both games were switched. In the first round, they conceded home advantage to opponents Beverley and the next, against Whitehaven, they moved to nearby Aberdare following issues with a muddy field on the day.

Last Sunday’s match also celebrated the home side’s 156thcompetitive encounter, a record for a South Wales-based professional club but any buntings that may have been put up would have gone down within minutes, due to the high winds and rain that ruined the match.

It was teaming with rain hours before the start and Storm Ewan continued throughout, unaffecting the 4G pitch at The Wern but certainly affecting ball handling, enjoyment and concentration.

Oxford go through to the fourth round as they handled conditions better than the Ironmen and only gave away half as many scrums – eight compared to Ironmen’s 15. They also took their chances where it mattered and made more correct decisions than their hosts.

Ironmen’s Shaun Owens was close to an opening try on 13 minutes but was held up centimetres short of the line, before Ben Jones’ grubber went over the dead-ball line. At the other end, Jake Joynt thought he’d scored Oxford’s opener but it was wiped out for offside.

Poor handling continued to deny both sides, Oxford even wasting a chance after kicking a 40-20, but eventually the visitors took the lead when Casey Canterbury dived over on 23 minutes. Jordan Gill’s conversion attempt was swept wide by the gale that was getting increasingly worse.

They increased their advantage eight minutes later after Will Cooke crashed through, again the try went unconverted as Gill overestimated what he needed to do to get the ball through and sliced it wide the other way.

Ironmen hit back straight away when Paul Edwards scored in the corner, Ben Jones only just missing the conversion attempt.

Oxford led 8-4 at the break and scored two further tries in the second half to wrap things up. Ten minutes in, Dwaine McRae found a gap to run through and score with Gill adding the extras before completing proceedings with five minutes to go as Cooke went over for his second which went unconverted.