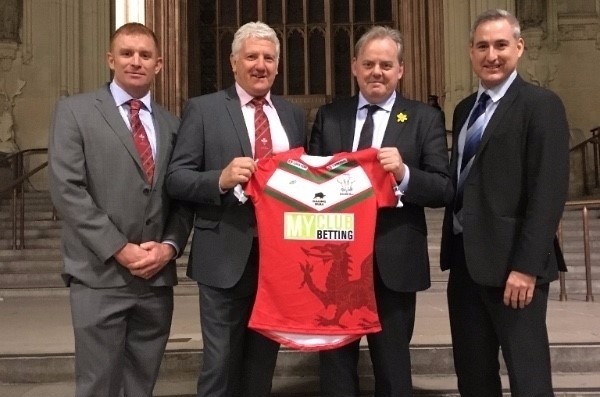 Peers and MPs were joined by associate members in the Palace of Westminster, as Wales Rugby League discussed participation, development and the growth of the game in Wales. There was a focus on the heritage and history of the sport in Wales, as well as on preparations for the forthcoming 2017 Rugby League World Cup, and opportunities to develop the sport.
Parliamentary Undersecretary of State at the Wales Office, Guto Bebb MP, was also in attendance as Brian Juliff, Chris Thair and Mike Nicholas from Wales Rugby League made a presentation in Parliament.
The Welsh men’s team are current European Champions, unbeaten in six games, and have qualified for the 2017 Rugby League World Cup, where they will face Papua New Guinea, Ireland and Fiji in the Group stages. Wales Rugby League now has over 1,600 club players, engages over 6000 more in schools and runs 16 representative teams which includes six international teams: Wheelchair, Students, Dragonhearts, U16s, U18s and Men.

Speaking after the meeting, Chairman of the Parliamentary Rugby League Group and Member of Parliament for Leeds North West, Greg Mulholland MP, said: “Members of the Group were delighted to welcome representatives from Wales Rugby League to Westminster. Wales’ qualification for the 2017 Rugby League World Cup presents a significant opportunity for the game in Wales, and I am glad to see that the sport’s governing body have a clear plan to further develop the sport.”

UK Government Minister Guto Bebb said: “The Wales Rugby League is doing a tremendous job developing the sport in Wales and providing opportunities for young people to take part in physical activity. Rugby league has a long and proud history in Wales but I also believe it has an exciting future. This year’s Rugby League World Cup offers a fantastic opportunity for the sport to inspire young people from across the whole of Wales to give rugby league a try, get active, and enjoy sport.”

Wales Rugby League Chairman, Brian Juliff, said: “Whilst Wales and Welsh players have a huge heritage in the sport, Wales Rugby League was only officially recognised as the National Governing Body for the sport relatively recently. Much has been achieved in that time, and we have attracted record levels of commercial and Sport Wales grant funding, as well as providing increased playing opportunities, particularly for young people. This is an exciting time for rugby league in Wales, and we have a clear strategy to develop the sport.”