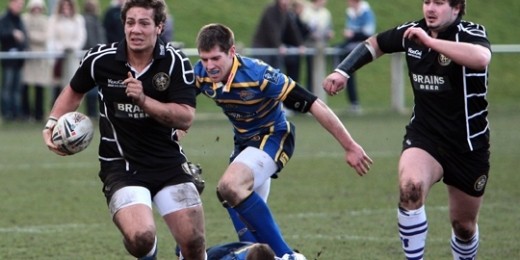 Celtic Crusaders reserves proved that they could make the step up to Super League level after turning over Leeds Rhinos 48-40 at Stanningley on Sunday afternoon.

“This is the biggest result in Celtic Crusaders’ history,” said Crusaders’ first team’s football manager / assistant coach Anthony Seibold, who made the trip with the reserves.

“Leeds Rhinos have the best nursery in the country and the fact that we have today taken them on and beaten them proves that the future of Welsh rugby league is in great hands. There were 13 Welsh-born players out on the pitch today and they did their all for Crusaders and Wales. I couldn’t be more proud of what was an outstanding performance from all of them.”

Ten of the Crusaders players were last year taking on the likes of Bramley Buffaloes and Hemel Stags on the way to winning the Conference National title while three were only last week facing East Leeds amateur club in the Gillette Under 18 youth league.

The Crusaders took their time to get into the match and were 12 points down in as many minutes.

Rhinos first try was after five minutes following a controversial decision when the tackle count wasn’t re-set after the ball hit a Rhinos player from Crusaders’ final tackle on the half-way line. Gareth Moore then pounced on a loose ball following a grubber on the next tackle to score. Simon Brown converted.

Crusaders hit back after winning a goal-line drop out from kick-off. Following good work from Lee Williams, Paul Ballard set up Steve Tyrer who charged through for a try on his club debut. The youngster who is on loan from St Helens for a year, converted it himself.

Minutes later the Crusaders were level following another slick move where Mark Lennon set up Tom Burnell to go in under the sticks. Tyrer had no problems with the kick.

But from their next set, the Rhinos took the lead again after Luke Hardbottle squeezed his way over and Brown converted.

Crusaders were again forced to defend after giving away a scrum. Mike Ratu raced away and looked to have scored a certain try but for Elliot Kear’s fine chase and tackle.

But Leeds went into the lead again after Moore broke through for his second with Brown keeping up his 100% kicking record.

Both teams had chances to score further tries before the interval.

Crusaders attacked ferociously after again winning a goal-line drop-out. Tyrer was held up over the line and from the next play, Mark Lennon’s clever grubber didn’t come to fruition.

The home side could also consider themselves unlucky when Ben Collins pass to a unchallenged Moore was forward.

Crusaders took the lead fro the first time in the game just six minutes after the interval. Elliott Kear created the try with a twisting run and White was on hand to pick up and burst through for his second. Tyrer kicked his fifth goal and Celtic Crusaders were beating Leeds Rhinos 30-24.

Tyrer, having an excellent day, intercepted another stray Rhinos pass and sprinted 60 metres to the line for his hat-trick and doing well to convert to make the score 36-24.

The debutant took advantage of a knock-on for his fourth try, following a final tackle high bomb by Mark Lennon. Again he kicked the conversion to take the Crusaders 18 points up.

The Welsh side looked for a while that they were going to throw the win away as the home side hit back with three quickfire tries.

They scored from their first set after regaining the ball Dane Edward Manning broke through the centre. Brown converted.

Then Moore twisted his way through to score under the sticks with Brown again adding the extras to bring the score back to 36-42.

Crusaders were now defending hard. Luke Ambler broke through but was stopped short of the line by Lee Williams and from the next play Crusaders regained the ball. Ben Collins was also forced into touch by Lloyd White preventing a certain try.

But with four minutes to go, Rhinos eventually got over the line for their seventh try. Ambler should have scored on the left wing save for a stumble but from the next play, Danny Lawton did break through on the opposite side. Brown missed his first and trickiest kick of the day and Crusaders were crucially two points up with three minutes left.

And as Rhinos legs tired, Paul Ballard sealed the win as he ran over in the final minute with his teams eighth try with Tyrer keeping up his 100% record to take his personal tally for the day to 32 points.

“I’m speechless,” said Crusaders’ reserve team coach Dan Clements. “This really is a fantastic win for us. It was a fantastic day for this side when we beat Bramley in last year’s Conference National Final and with no disrespect to anyone involved that day, this is much bigger. Well done to the entire side, they did Wales proud on St David’s Day.”