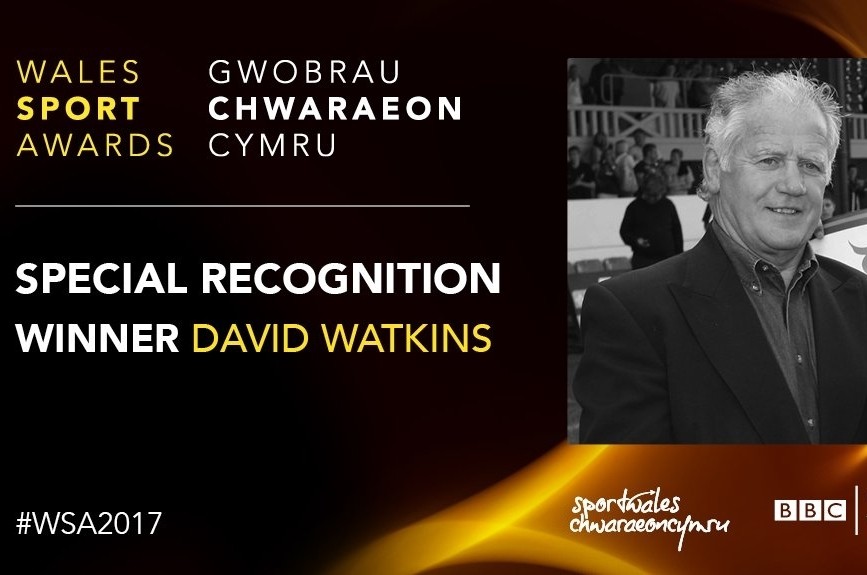 For two years in a row, the Wales Sports Awards have recoginsed a Welsh Rugby League great.

Former Salford, Wales and Great Britain International David Watkins MBE was on Monday evening presented with the Special Recognition Award at the Sport Wales Awards at the luxurious Celtic Manor Resort in Newport.

It is the second year in a row that  rugby league international from Wales has been recognised at this event. Last year, the Cardiff-born former Wigan star Billy Boston was given the Lifetime Achievement award, and it’s credit to Wales’ rich rugby league history that BBC Wales and Sport Wales have again jointly chosen to recognise another rugby league legend just 12 months later.

Watkins, commonly known as “Dai” to all of his Welsh friends, is famous as the only man to captain Wales and the British Lions in both codes, including the last time Wales beat New Zealand in a full international in either form, a 25-24 win in Swansea in 1975. But that is just part of his story.

Born in Blaina in 1942, he famously played for Newport for seven years, scoring 294 points in 202 games, the highlight being a 3-0 home win over the touring All Blacks in 1963. He was capped 21 times for Wales RU and six times for the Lions.

His move to Salford in 1967 for £16,000 was a shock to everyone in rugby union at the time and no one could imagine the success he would have in league, even surpassing his already distinguished union career.

Dai became Salford’s record points scorer with 2,907 points in 407 games and in 1972-73 he kicked a world record 221 goals in a season. He also holds the longest scoring run record where he notched points in 92 consecutive matches for Salford from 19 August 1972 to 25 April 1974. Heritage number 268, he won 16 Wales RL caps, captaining the side to 1975 World Cup wins over England, New Zealand and France, and six caps for Great Britain.

In 1977 he coached Great Britain in the World Cup as they reached the Final only to lose 13-12 to Australia. He then went on to coach Wales and also became one of the founders and coaches of Cardiff City Blue Dragons in 1981, helping to reintroduce rugby league into South Wales. He received an MBE for his services to rugby league in 1986.

Watkins said: “I wasn’t expecting this at all. When you play your sport you hope you’ll do well and play in a good side and that’s it. I was small, found it tough and was pleased to do well. For me, a Blaina boy, to be honoured like this is special.

“I still enjoy watching both codes and I’m pleased that I had the opportunity to play and be involved in both rugby union and rugby league. Thank you to everyone.”

Broadcaster and writer Carolyn Hicks has been a friend of Watkins for 16 years since meeting on a British Lions tour and is currently researching into Welsh dual-code players. She accompanied Watkins to the awards night and said: “I don’t think we acknowledge our rugby league history enough in Wales. It’s wonderful that we’ve done just that tonight as David achieved everything in two codes. He’s  so modest and he’ll play down every achievement he’s ever had. He’s kind, generous, has a wonderful sense of fun and I’m pleased that he’s getting the accolade he so richly deserves.”

Torfaen Tigers, based at Cwmbran RFC, is now Watkins’ local rugby league club and their chairman Rob Davies was delighted to meet Watkins on such a special night.

He said: “It was an honour to be at the Celtic Manor on Monday to see Dai’s achievements recognised. It was fantastic to finally meet him as he’s arguably Gwent’s most famous rugby league son.”

Click here and go to the 25:30 mark to see BBC Wales’ tribute to Watkins.