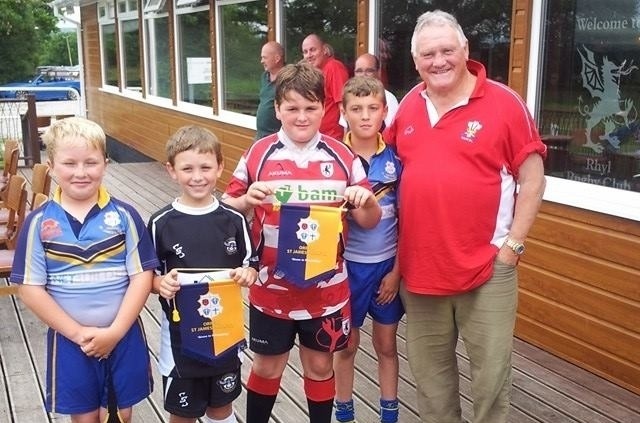 The famous Orrel St James club attended the recent North Wales Juniors RL Festival at Rhyl last weekend. They brought their under 10s squad along to do battle against the local under 10s from Prestatyn & Rhyl Panthers and Flintshire Falcons.

Rhyl’s Waun Ground looked in great condition on a bright and sunny Saturday morning, ideal for running Rugby League. First to play were Orrel and the Panthers. Any thought that the visitors may have had for an easy run out in the North Wales sun were soon dispelled as the Panthers tore into the Orrell boys with a vengeance. A real ding-dong affair was witnessed by a good crowd of parents, family and friends and the game ended in a draw, 4 tries each.

The second game saw Orrell take on the Falcons under 10s. Orrell were now well aware that the North Wales teams could really compete with them and were far better prepared to take on the Falcons. Again this was a very close and competitive encounter with the Orrell side running out winners by 6 tries to 4.

It was then the turn of the under 12s to take centre stage at the Panthers took on the Falcons in what turned out to be an ultra competitive game with no quarter asked or given as the Falcons ran out victors by 5 tries to 4 in another excellent game.

Next up was a big local derby at U10s as the Panthers and Falcons did battle. Once again there was nothing between two very well matched teams with the Falcons edging the game by one try.

The Festival closed with a joint Panthers/Falcons team taking on Orrell St James. The North Wales boys held a half time lead of 6 – 0 and put in a fantastic defensive display to hold the visitors at bay. However the second half was a different affair as the visitors pressed home their advantage in game experience to run out victors with four unanswered tries in the half.

Community Rugby League Coach, Allen Jones, was delighted with how the day went, saying: “What impressed me most today was how close and competitive all the games were. The North Wales boys competed really well against a side that plays regular fixtures each weekend in the North West Counties League. The Coaches at Falcons and Panthers deserve a real pat on the back for the work they are doing at both U10s and U12s, the boys did just great today.”

Jones was also full of praise for the visiting Orrell St James Club saying: “Orrell made it a very special day for us, they came down mob handed in a bus with players, coaches, parents and family and made a real good day of it. Their behaviour and discipline both on and off the pitch was first class and we owe them huge thanks.”

Jones concluded “We would hope to repay the Orrell Club with a return visit later on in the summer. The Panthers Club also deserve huge credit for hosting such a well organised and enjoyable day. A big thank you also to Wales RL President, Mike Nichollas for attending and handing out the end of festival prizes and to referee Steve Allen who as ever controlled the games in a sympathetic but firm manner. A great day all round.”