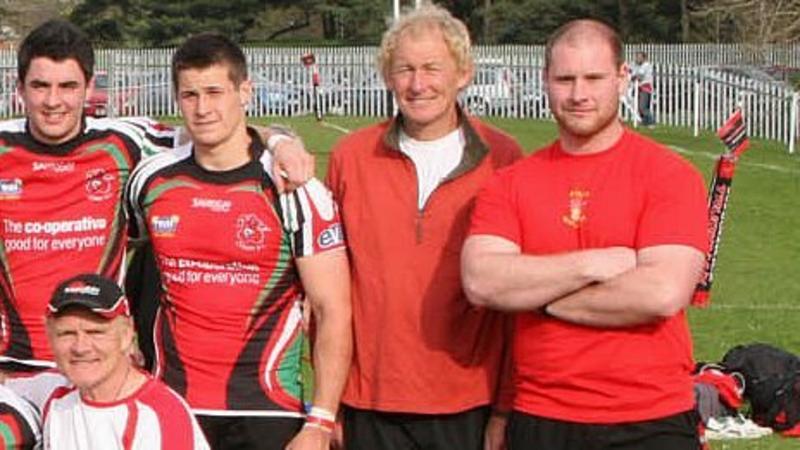 Wales Rugby League are sad to announce that following a year-long battle against cancer, one of our former pioneers of the game, Dr Phil Melling, died overnight on Friday.

Our condolences go out to his family and friends. He leaves behind his wife Sue, three children, Tom, Kirsten and Hannah and a grandchild.

Born in Wigan in 1947, the son of a miner, Phil was a unique character who had a fierce and evangelical love of Rugby League. He moved to Swansea in the late 1970s, after attending University of Manchester and University of Indiana, and was responsible for much of the development of the game in South Wales from then on.

He established the Swansea University Rugby League club in the late 1970s when he was a lecturer and professor in American Studies at Swansea University. It was the only Rugby League club in Wales at the time, with no opponents within 100 miles, and was formed by Phil in the face of hostility from the Welsh Rugby Union, who would threaten to ban any player from every playing rugby union again in those days even if they played Rugby League for no recompense.

And yet Phil was able to put out a team that held its own against all the other emerging teams in the Student Rugby League of those days, which itself was less than a decade old, leading his Swansea University side to three national student semi-finals and two national finals in the 1980s.

A true pioneer, he almost single-handedly faced down the WRU in ensuring that amateur Rugby League sides were allowed to use pitches and get coverage in newspapers.

Phil was the first chairman of the Welsh Amateur Rugby League and in the late 1980s, his hard work with Students Rugby League started to come to fruition with the formation of the Welsh Students international side, who entered the 1989 Student World Cup, the second of its kind. Under his managership and Clive Griffith’s coaching, Wales won the Student European Championships for five years in a row in the late 1980s and early 1990s. He also helped to organise a successful Nines tournament in Swansea in 1991 competed by sides from all over the United Kingdom including a number of rugby union sides despite the threats of a ban by the WRU.

In addition to his work in Wales, he also managed the Great Britain Rugby League student team in 1990 and acted as an adviser to the Lebanon team in the 2000 Rugby League World Cup.

Always a Wigan supporter, Phil also wrote and contributed to books about Rugby League and was a key figure in efforts in the 1980s to force the rugby union authorities to open a free gangway between the codes. He was also a playwright of great skill, writing a number of plays, the best known of which was ‘Hotel Vietnam’ (1995).

His final involvement in Rugby League in Wales came in 2010 when he was again appointment Team Manager of the Wales Students side by his good friend Clive Griffiths for that year’s Student Home Nations tournament where Wales finished second. He considered this a great honour after creating the student game in Wales over 30 years before.

Griffiths, who has coached the Wales Student side for the past three seasons, said: “Wales lost a great stalwart today. It’s a sad day for his family and friends and for the game as well. Phil single handily re-introduced domestic Rugby League to Wales in the late 1970s. It became his passion. He combined his hours of work as a lecturer at Swansea University with getting Rugby League off the ground and keeping the Swansea University Rugby League team afloat.

“Phil brought numerous players into the game and through the ranks and we’ll always be grateful to him for that. He was manager of the Wales Students team on a number of occasions, manager of the Great Britain students side at one point and vice-chairman of Wales Rugby League so his involvement in the historic stages of development cannot be underestimated. He single-handedly introduced the student game into Wales in the bad old days when it wasn’t meant to happen. He’ll be sorely missed. He wasn’t just a great man of Rugby League, he was a great friend to me and many others – a real gentleman. Any problems or advice I needed I could always get on the phone to Phil – I could always confide in him.

“In 1992 we got to the Student World Cup semi-final and I’ll never forget his face when we took on Australia in that game – it was a joy to behold. When I came back into the fold years later with the Students, he was the first person I asked to be involved with me. It was one of his lasting memories.

“I spoke to Sue, his wife today and she said that he fought his disease to the bitter end which was typical of Phil. She told me that his funeral will be in Wigan so he’s finally going home.”

“He will also be remembered for his literary contributions including a work on black, Asian, Maori and Aboriginal players in British Rugby League, “The Glory of their Times; Crossing the Colour Line in Rugby League” featuring great players like Billy Boston and Cec Thompson, and “Man of Amman : The Life of Dai Davies” about the only man to play in four losing Wembley finals with both Keighley and Warrington (Dai became a personal friend during my time with Warrington).

“Our thoughts and sympathy are with Phil’s family at this sad time. Rugby League in general is all the poorer from losing such a staunch and stalwart supporter of our great game.”

“I’m sure that he was pleased to see much of his hard pioneering work come to fruit with Wales playing in the Four Nations this year, and I know how delighted he was to be Team Manager of Wales Students again last year to complete over 30 years of his involvement at that level. He will be sadly missed and our condolences go out to widow Sue and his family and friends.”

Professor Tony Collins, fellow writer and co-author of “The Glory of their Times; Crossing the Colour Line in Rugby League”, also speaks highly of his good friend.

“Phil made a huge contribution to Rugby League as a coach, administrator, evangelist and writer,” he said. “In the early days of Rugby League in Wales in the 1970s, he stood up to every dirty trick the Welsh Rugby Union establishment could throw at him to stop Rugby League. He was also involved in expanding the game globally, most recently in Serbia and tried to establish the game in Cuba, a country he loved and visited often.

“His wrote about the game from a unique perspective. His deep love for and knowledge of American literature allowed him to articulate the meaning of Rugby League in a way that no other writer could – everyone in rugby league should read his 1994 classic ‘Man of Amman’. This was a man whose passion and intellect meant that he could talk about his beloved Billy Boston in the same terms as he would discuss the novels of William Faulkner or Ernest Hemingway. He was working on a biography of Hemingway when he died – I once suggested to him that when he finished that he should wrote the definitive biography of Billy Boston. ‘Billy’s too important for me to write his biography,’ he replied, putting Hemingway firmly in his place.”

“But despite his subordinate position to Billy, Hemingway remained Phil’s favourite author. Hemingway once remarked, ‘as you get older it is harder to have heroes, but it is sort of necessary’. Phil was one of rugby league’s necessary heroes.”

* My thanks go out to Tony Collins, Martyn Sadler, Mike Nicholas, Clive Griffiths and Janet Ryder for their assistance with this article – Ian Golden.