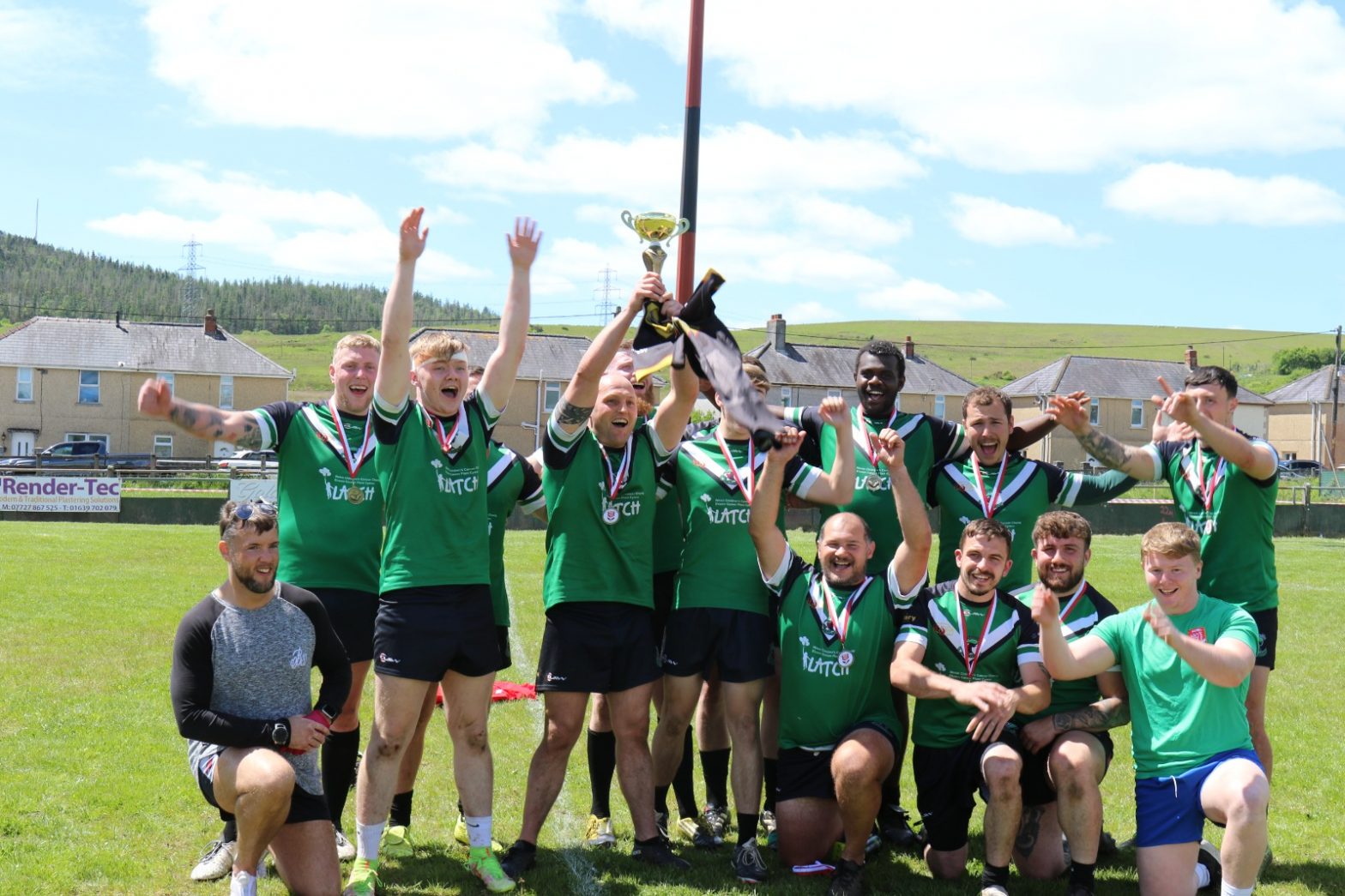 The tournament was supposed to end with a final between the top two sides, but injuries had seen Aberavon down to less than nine fit players, so they conceded and allowed top of the table Rhondda to collect the trophy following their final group game.

Black Dragons were up first, taking on Aberavon and it was a close match for the hosts, who were playing their first ever club match after being formed earlier this year. Aberavon, playing their first open age match in 16 years, won 22-18 thanks to two tries and three goals from Isaac Morgan, and one try each from Shaun Wright and Will Davies. Jordan Phillips, Dai Felton and Dylan Hills replied for the Black Dragons, with Felton kicking three goals.

Next up were Aber Valley Wolves, playing in their first open-age match in six years, taking on Rhondda Outlaws who were dominant with a 42-0 win, all done with five point tries, which is achieved in Rugby League Nines if a player scores under the sticks. Chris Harris led the way with a hat-trick of tries, with Ben Pinnock, Alex Langers and Rhys Hawkins also scoring. Harris kicked two goals, Pinnock one, Langers two and Hawkins one.

Rhondda then overcame Aberavon Fighting Irish 25-0. The Outlaws ran in four tries, the final one being a five point try. Langers was over again, along with Rhodri Garland, Rhys Hawkins, Mark Addis and Jordan Williams. Chris Harris kicked two goals.

In game four, Black Dragons recorded their first win as a club as they beat Aber Valley 28-10, with the Wolves having to call on club junior player and match official Mason Apsee due to injuries. Apsee, who had initially turned up to referee along with his father Rob, was outstanding and converted Shaun Webber’s try with Keenan Davies scoring the other. Leighton Llewellyn, Jordan Griffiths, Ben Pugh, Garan Hevil and Daniel Cole scored the tries for Black Dragons, with Dai Felton kicking the goals.

Game five saw a classic with Aberavon edging out Aber Valley 33-29. The Wolves had fought back after being 26-7 down at one point in the game and were pulled into touch a metre from the try-line when the final whistle blew. Isaac Morgan and Will Davies each scored two tries and kicked two goals for Aberavon with Shaun Wright also crossing. Keenan Davies scored a hat-trick of tries, with Toby Davies and Bradley Toy also scoring for Aber Valley. Mason Apsee kicked three goals.

The final game was tight as Black Dragons needed to beat Rhondda to qualify for the final. A five-point Rhodri Garland try, converted by Chris Harris, plus a try and goal from Harris, gave them a 14-0 lead at half-time. Dylan Hills got one back for the hosts before a Chris Harris four-pointer put the Outlaws out of sight. Kane Griffiths hit back for Black Dragons, but it was too little too late as Rhondda won 18-8 and Black Dragons finished third in the table with the Outlaws being crowned champions.

WRL would like to thank all the sides for making this a successful tournament at the excellent hosts at Banwen, home of the Black Dragons. Also thanks to referees Rob Apsee and Jon Palmer, who ended up refereeing more matches each than they originally planned with Mason Apsee ending up as a player!