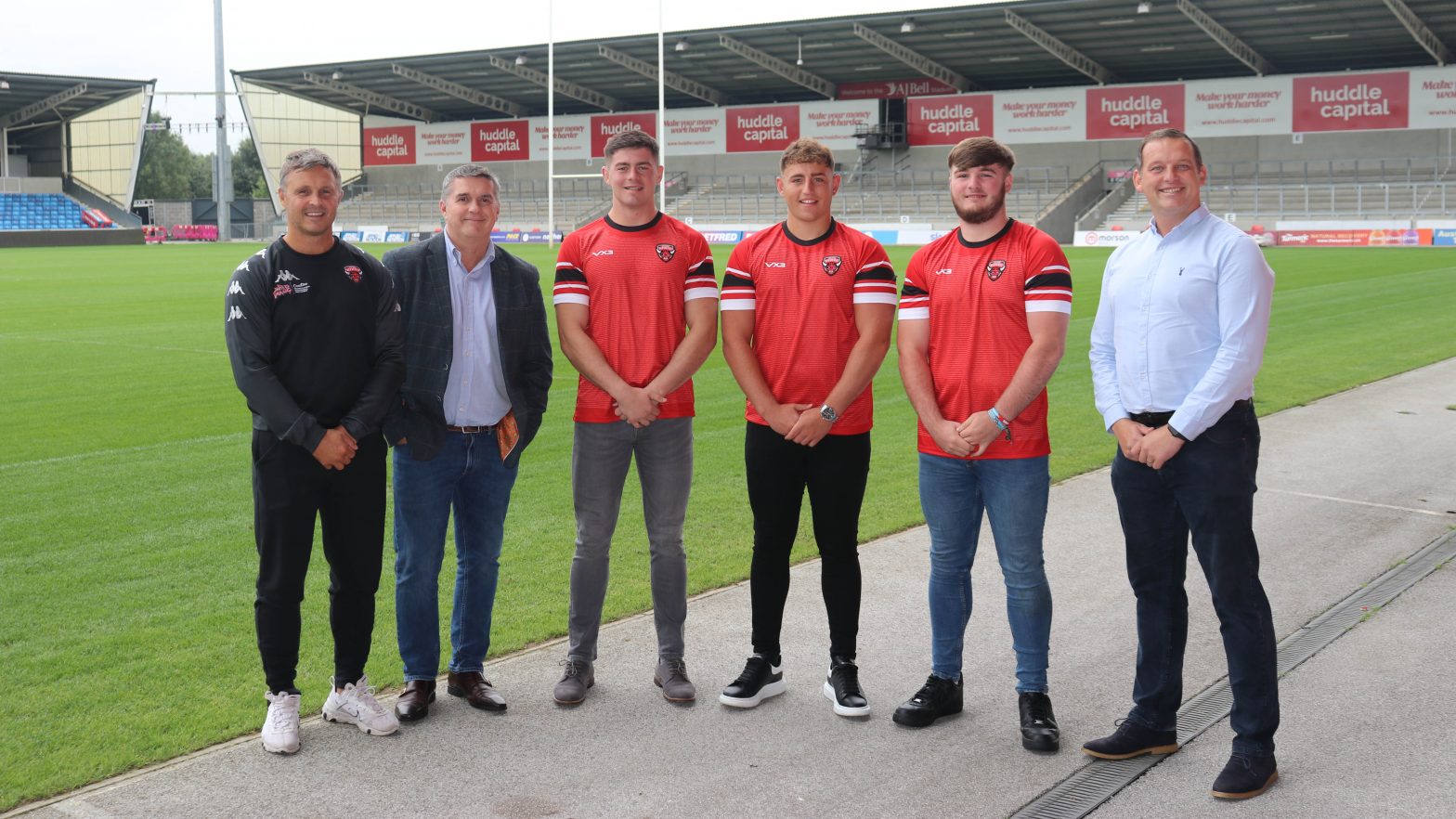 Wales Rugby League and Coleg y Cymoedd are delighted that Salford Red Devils have welcomed in the first three players through our partnership with the Super League club.

Ieuan Roberts, Jake Lee and Joe Coope-Franklin will join the club’s reserve Squad for 2022. The trio visited the AJ Bell Stadium on Wednesday to meet key club staff and tour the stadium, in advance of their move to the North West of England next month. 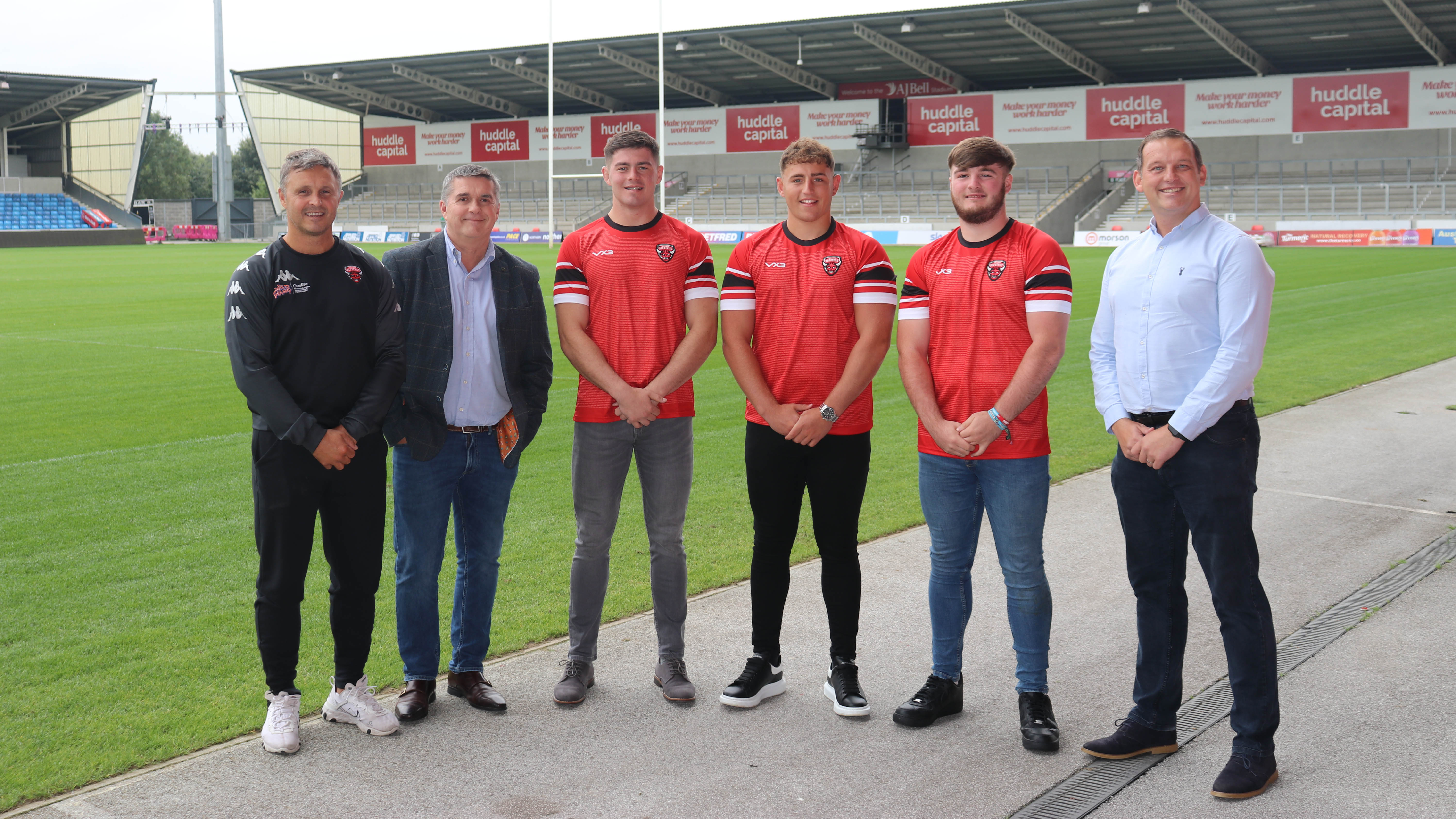 All three players have been studying and playing rugby league at the WRL National Development Academy at Coleg y Cymoedd, with Coope-Franklin, 19, beginning his rugby league career there after switching from rugby union.

Roberts, who turns 20 this month, came through the Aber Valley Wolves club in Caerphilly and has won caps for Wales U19 and Wales Students.

Lee, who turned 19 last month, also came through the Wolves junior set-up whilst also playing once for Cardiff Blue Dragons. He has won caps for Wales U16, U19 and Wales Students.

The three players will join the Salford Red Devils reserve Squad for pre-season training, combining their rugby development with their studies at the University of Central Lancashire.  They have been identified by Paul Rowley, Stuart Wilkinson and Ian Blease during national training camps and their performances within the Wales international pathway programme.

Paul Trainor, Executive Director of the club said “We are really pleased to welcome Ieuan, Jake and Joe to the club. They have greatly impressed Paul, Stuart and Ian during their visits to Wales. It was great to meet the lads and their families to discuss the plans that will be in place for when they join the Reserve set up for pre-season.”

Paul Rowley, Head of Talent and Pathways said: “Our Welsh partnership has gone from strength to strength and these boys are another example of that.

“From talent identification and development by Stu Wilkinson to housing and educational support by Paul Trainor, these boys have been given a wonderful opportunity to continue the tradition of Welsh stars pulling on the Salford jersey.

“We have complete confidence that each of the lads have both the ability and strength of character to be successful rugby league players and are very confident these athletes will be the first of many as our work in Wales continues.”

Mark Jones, Head Coach of the Wales Rugby League National Development Academy, added: “Coleg y Cymoedd’s partnership with Salford Red Devils and Wales Rugby League is truly flourishing and I am elated for Ieuan, Jake, Joe and Ryan who are the first players to come through this new rugby league pathway. They are a testament to all the hard work the Salford, Cymoedd and Wales Rugby League staff have put in over the last 12 months.

“With Salford Red Devils’ history of signing Welsh players, we knew its was a natural fit for Coleg y Cymoedd and the WRL National Development Academy and I am looking forward to the new Welsh boys signing their contracts with Salford in the next few months.

“I would also like to thank UCLAN for all their support and we are looking forward to working with them over the next few years.

“We are the only college in Wales that offers a full time rugby league programme alongside a student’s education and Welsh players definitely now have a direct pathway to achieve their dreams of playing Super League.”

If you are interested in attending the Cymoedd Rugby League Academy please take a look at the presentation at National Development Academy Coleg y Cymoedd then complete an online application form HERE and you will then receive a reply outlining what needs to be done next to secure your place.