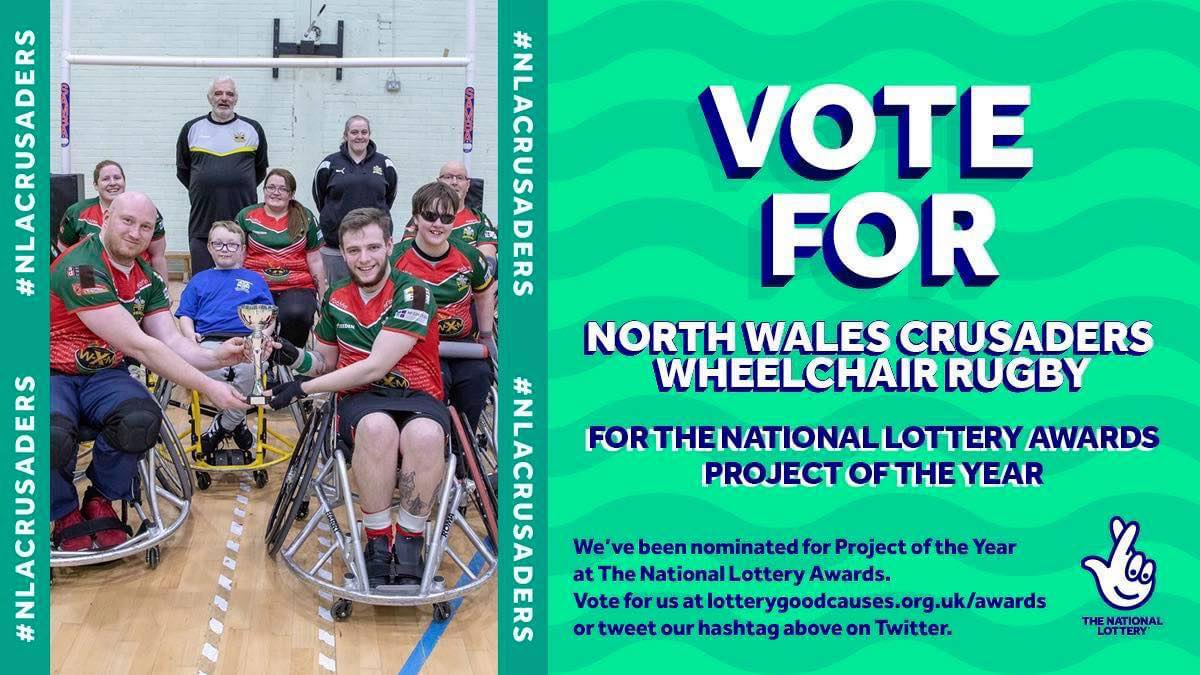 North Wales Crusaders Wheelchair Rugby League & Disability Sports Club, which aims to make rugby league accessible to everyone, is appealing for votes in order to be crowned National Lottery Project of the Year. CLICK HERE TO VOTE FOR THEM NOW

Based in Wrexham and Flintshire, the club has beat off stiff competition from more than 1500 organisations to reach the public voting stage in this year’s National Lottery Awards, which celebrate the inspirational people and projects who do extraordinary things with the help of National Lottery funding.

There are 17 shortlisted finalists from across the UK, who will compete in a four-week public vote to be named the inaugural National Lottery Project of the Year. Winners will receive a £3,000 cash prize for their project and an iconic National Lottery Awards trophy.

North Wales Crusaders Wheelchair Rugby League & Disability Sports Club was founded in April 2013 to make rugby league accessible to everyone in North Wales and the surrounding areas. Since then, the club for wheelchair (and non-wheelchair) users has produced 16 international players and continued to grow during the pandemic, providing a vital social outlet.

The club is a joint venture between North Wales Crusaders, Wales Rugby League and Disability Sport Wales. Several National Lottery grants from Sport Wales amounting to £23,526 has helped equip the teams with sports wheelchairs, making the club more accessible. The funding has also been used to help the club find new storage for its specialist wheelchairs and to purchase critical PPE to function safely.

North Wales Crusaders is the only wheelchair rugby league club in the world to have three teams playing in the same league system and has seen the biggest growth in members out of all the established clubs in the UK. Despite COVID-19, the club has also been working hard to expand its activities and will be the first in Wales to set up a Physical Disability Rugby League (PDRL) side, a version of rugby league which allows non-wheelchair users with disabilities to play the game.

Head coach Stephen Jones, who started as a player and now coaches the Welsh team, says: “We are delighted to learn that our club has reached the finals of the National Lottery Awards.

National Lottery funding has helped make the club more accessible. Our version of the sport is all inclusive – we encourage people with a range of disabilities and people without disabilities to get involved. There’s a family value at the club and that gives people who have gone through tough times a belief they’re not alone.

The sport has such a positive impact on the lives of those who take part and it would be an amazing tribute to all the dedication and hard work of our coaches and team members to be crowned Project of the Year in the National Lottery Awards.”

Jonathan Tuchner, from the National Lottery, added: “In these challenging times that we still find ourselves in, we see so many examples of inspirational work throughout our communities, driven by these very projects. It’s thanks to National Lottery players, who raise more than £30 million each week for good causes, that brilliant projects like these, are possible.

“North Wales Crusaders Wheelchair Rugby League & Disability Sports Club are doing some incredible work in their local community and they thoroughly deserve to be in the finals of the National Lottery Awards Project of the Year 2021. With your support, they could be a winner.”

To vote for the North Wales Crusaders Wheelchair Rugby League & Disability Sports Club, please go to lotterygoodcauses.org.uk/awards.  Or simply use the Twitter hashtag #NLACrusaders on twitter. Voting runs from 9am on 6th September until 5pm on 4th October.