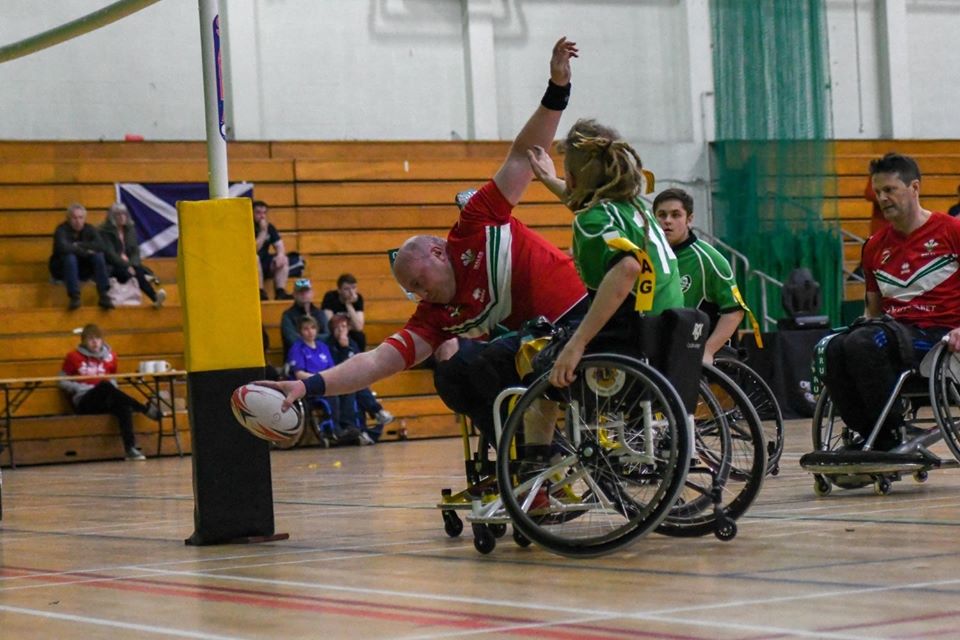 Wales Wheelchair rugby league’s captain Stuart Williams and head coach Steve Jones, are both up for honours at the inaugural Wheelchair Rugby League awards on Friday 31st January at Emerald Headingley in Leeds.

Williams, who is also Wales’ top test try scorer with 41, is one of eight players who have been nominated for the first ever International Rugby League Wheelchair Golden Boot, whilst Jones is in line for Coach of the Year in the UK domestic awards, thanks to his work with North Wales Crusaders. The Crusaders themselves are amongst the nominations for Club of the Year.

All are up against good competition but they will all be deserved winners should they take the awards.

As Wales captain, Williams led his country to their fourth successive Celtic Cup triumph last year. He scored 14 tries and kicked nine goals in just five international tests in 2019, and this included a six-try haul against Scotland in the Celtic Cup – only the second time in Welsh history that this has been achieved. He also added seven goals in that match for a personal points tally of 38 in that game alone.

Jones, who has coached Wales for three of those Celtic Cup victories, had an outstanding year as coach with club and country in 2019. He coached North Wales Crusaders to a creditable third in the Wheelchair Super League, only behind Grand Finalists Leeds Rhinos and Halifax, and did well to pull off some memorable wins. They also provided the bulk of the Welsh national side who won the Celtic Cup and ran England close in an autumn Tri-Nations.

North Wales Crusaders fielded two sides in 2019, in the Super League and the Championship. They were the only Wheelchair club to do this and in 2020 will expand even more by fielding a third.

Jones said: “I’m really proud of what we achieved at North Wales Crusaders in 2019. As well as fielding two sides in the RFL leagues, we went into schools in Flintshire and Wrexham to introduce newcomers to the game, and we held a charity event called The Peacock Cup and raised around £3,000 for Hope House Children’s Hospice. We’re also the only rugby club in wales awarded the Insport Silver Award by Disability Sports Wales. Plus Stuart Williams is the current captain for the Super League team.

“These nominations are great for the game of Wheelchair Rugby League in Wales, and I’m really proud of what we’ve all achieved in a short space of time.”

The introduction of the International Rugby League Wheelchair Golden Boot will provide the game with a trio of global award winners.

The Golden Boot was founded in 1984 by Open Rugby magazine, with Wally Lewis winning the inaugural award. New Zealand’s Roger Tuivasa-Sheck was crowned the latest winner in November, when Australia’s Jessica Sergis became the second winner of a Women’s award which was introduced in 2018.

Nigel Wood, the IRL’s Chief Executive Officer said: “We are delighted to announce the addition of a third Golden Boot award for Rugby League.

“We are keen to recognise the rapid progress of Wheelchair Rugby League over recent times, and the outstanding skill, athleticism and courage of those involved. It is without doubt, one of the greatest undiscovered aspects of Rugby League but that will all change as Wheelchair Rugby League continues to excite, thrill and enthral up to, and beyond the World Cup. The award of the Golden Boot will attract more eyeballs to this magnificent version of Rugby League and that can only be welcomed.”