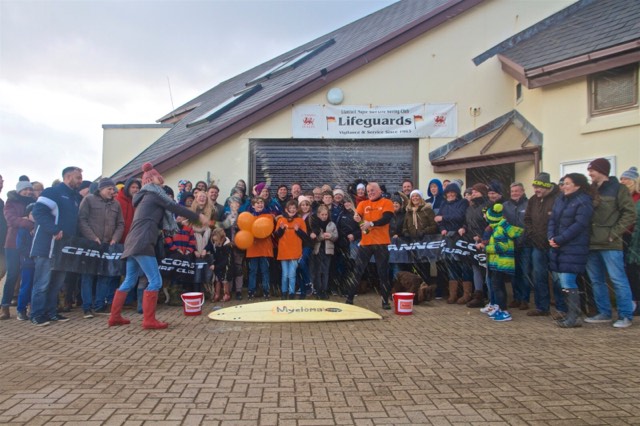 Wales Rugby League have congratulated former employee Mark Jones for completing his charity virtually paddle around the Welsh Coastline, as he raised money for Myeloma UK.

Jones, 49, from Llantwit Major in the Vale of Glamorgan, was in hospital for three weeks after having chemotherapy and a stem cell transplant – just one part of his year-long treatment for the terminal illness.

So, for 28 days, whilst he was in hospital and then in rehab, he had a hand paddle machine in his room and blasted out 50kms at a time going from and to pre-mapped out areas around the country.

By Sunday 8th December, he had completed the 1,400km from University Hospital to Deeside and back to Llantwit Major Beach, and celebrated by actually going to said beach with his surfboard to be welcomed by friends and family.

A keen surfer and former semi-professional rugby player, Jones was the National Development Manager at Wales Rugby League from 2009 until 2015. He then transferred over to Coleg y Cymoedd as head of rugby league, continuing the good work he had started when overseeing the AASE Academy.

He said: “The fundraiser total is awesome, please continue your generosity and gives as little or as much as you can afford in this expensive month. Every little helps so please keep giving.”

Good friend Louise Morgan, who is team manager of the Wales Rugby League women’s side, said: “I’ve known Mark for many years and it was great to support him on Sunday after his final paddle for Myeloma UK. He is an inspiration to us all.

“I know that everyone at WRL has been supporting him through his journey. He has been a great help to me since becoming team manager for the Wales Women’s side and I look forward to hopefully working with him in the future.”

To give to the fund, please go to https://www.justgiving.com/fundraising/mark-jones256

The book will include the back story of why he needed a stem cell transplant and how the fundraiser evolved. It will also include all the paddle updates he posted on Facebook and all the photographs. Their website is at https://www.mclays.co.uk/.

In addition, “Fine Rolling Media” will be making a documentary film following my journey over the next year and it will be entered in the London Surf film festival in October 2020 on Mark’s 50th birthday. More information at https://londonsurffilmfestival.com/.