In an historic day at New River Sports Centre, the top four London-based teams played in a triple-header to kick-off the 2017 edition of the Ladbrokes Challenge Cup. London Chargers faced the Bridgend Bull Bulls, hosts the London Skolars faced London Broncos in a pre-season friendly and new-comers to the Challenge Cup competition, the Wests Warriors played the British Police. The 4G pitch at New River Sports Centre would prove the perfect conditions for London Chargers to start their campaign against the travelling Bulls.

The Chargers took charge of the game from the very first kick of the ball which landed deep in the Bulls half. Slick hands on fast feet saw the charging London side run in the first of what was to be a 20 tries to nil scoreline. The London side rarely relinquished possession in the first half with the Chargers scoring 40 points to nil by the break.

The second half saw the Chargers step up their effort and run away with the game – only to post their largest ever score 116-0.

Chargers’ half-back Phil Lyon was to be the star of the game finishing with a personal points tally of 52 points, scoring four tries and kicking 18 from 20 attempts at goal. Unfortunately, this saw him fall just short of the long-standing Challenge Cup record held by Chris Thorman who scored 56 points in a 132-0 win for The York City Knights against Northumbria University in 2011. Lyon can claim the title of the second highest ever individual score in a Challenge Cup game. 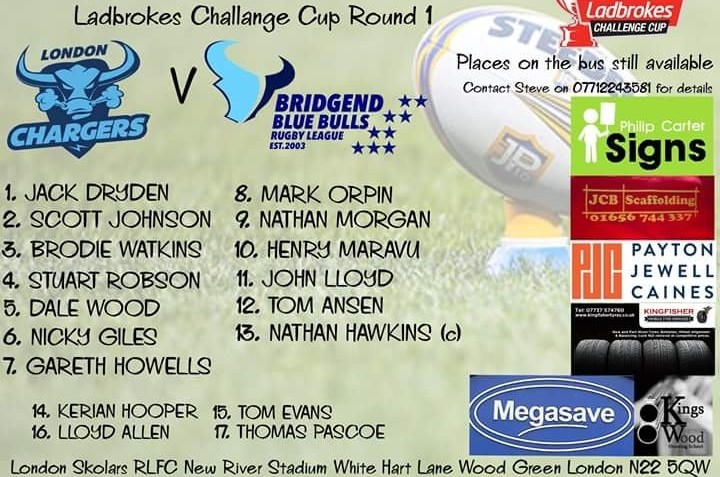