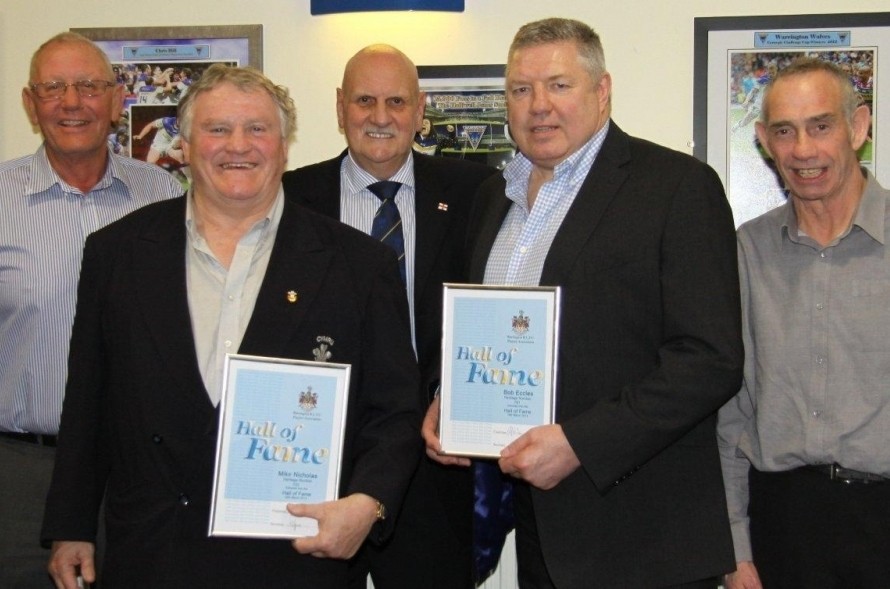 Wales Rugby League’s President Mike Nicholas has been inducted into the Warrington Wolves’ Hall of Fame.

It is excellent timing for the former Wembley Cup Final winner as he launches his new book “From Swn-Y-Mor to Seattle” tonight (Tuesday) at 7pm at the Halliwell Jones Stadium in Warrington.

He has a South Wales launch and signing at 11am on Saturday 26th April at Aberavon RFC before their match against Carmarthen Quins.

The former Wales international moved from Aberavon to Warrington in the early 1970s to turn professional and made 152 appearances for the Rugby League club, the highlight being the 24-9 victory over Featherstone Rovers where he scored a try that was portrayed in Grandstand’s titles for a number of years. This is naturally the focus of the first chapter of “From Swn-Y-Mor to Seattle”.

Winning six caps for Wales, including two wins over England, he was also infamous for being sent off 15 times in his career, the focus of the second chapter of the book.

He became Wales’ team manager in the mid-1990s, replacing his old on-field rival, the fellow Welshman Jim Mills, then in 2004 he was elected President of Wales Rugby League.

Nicholas said: “Over 1,100 players have worn the primrose and blue over the last 120 years. Given those figures, I’m absolutely delighted to be one of the 40 inductees to date and I’d like to thank all at Warrington RLFC for electing me. Immortality at last (at least in Warrington) and it’s perfect timing for me with my book coming out this month.”

Wales Rugby League’s chairman Brian Juliff, himself a former Wales international, said: “It is an amazing accolade to enter any ‘Hall of Fame’ but I know how important this is for Mike.

“It is rich reward for an Aberavon boy to be honoured in this manner by his adopted team and it is thoroughly deserved.

“I was thrilled to be a contributor to Mike’s book and, as a former opponent and occasional team mate with Wales, can remember so much of his playing career.

“This is a story about one of our top players in either code of rugby and has been a long time coming. An excellent read with plenty of humour as you would expect from Mike and I wish him every success on release.

“Mike is a great ambassador for Wales in all sports and remains a fervent and passionate supporter of Welsh rugby in both codes. Congratulations Mike Nicholas, our President at Wales Rugby League and a lifelong friend.”

Wales Rugby League’s Chief Operating Officer Chris Thair said: “Everyone involved with Wales Rugby League is delighted for Mike as being in Warrington’s Hall of Fame is a fantastic recognition for an illustrious and eventful playing career.

“Playing and winning at Wembley, beating Australia’s national team with Warrington, representing Wales and having such a long professional career at highest level represents something that many people can only dream about.

“Having lived that dream Mike continues with the same enthusiasm and passion in his role as WRL President and continues to be tremendously influential in the games development here in Wales.

“Whilst his story telling and humour are legendary, as you will see when you read his new book, what impresses me most about the man is his constant desire to look forward and find solutions to ensure the game of rugby league, which he loves deeply, continues to grow and improve here in Wales.”

For more information or to order Mike’s book “From Swn-Y-Mor to Seattle”, please go to http://www.llpshop.co.uk/.

Behind the Scenes, Hall of Fame, International RL