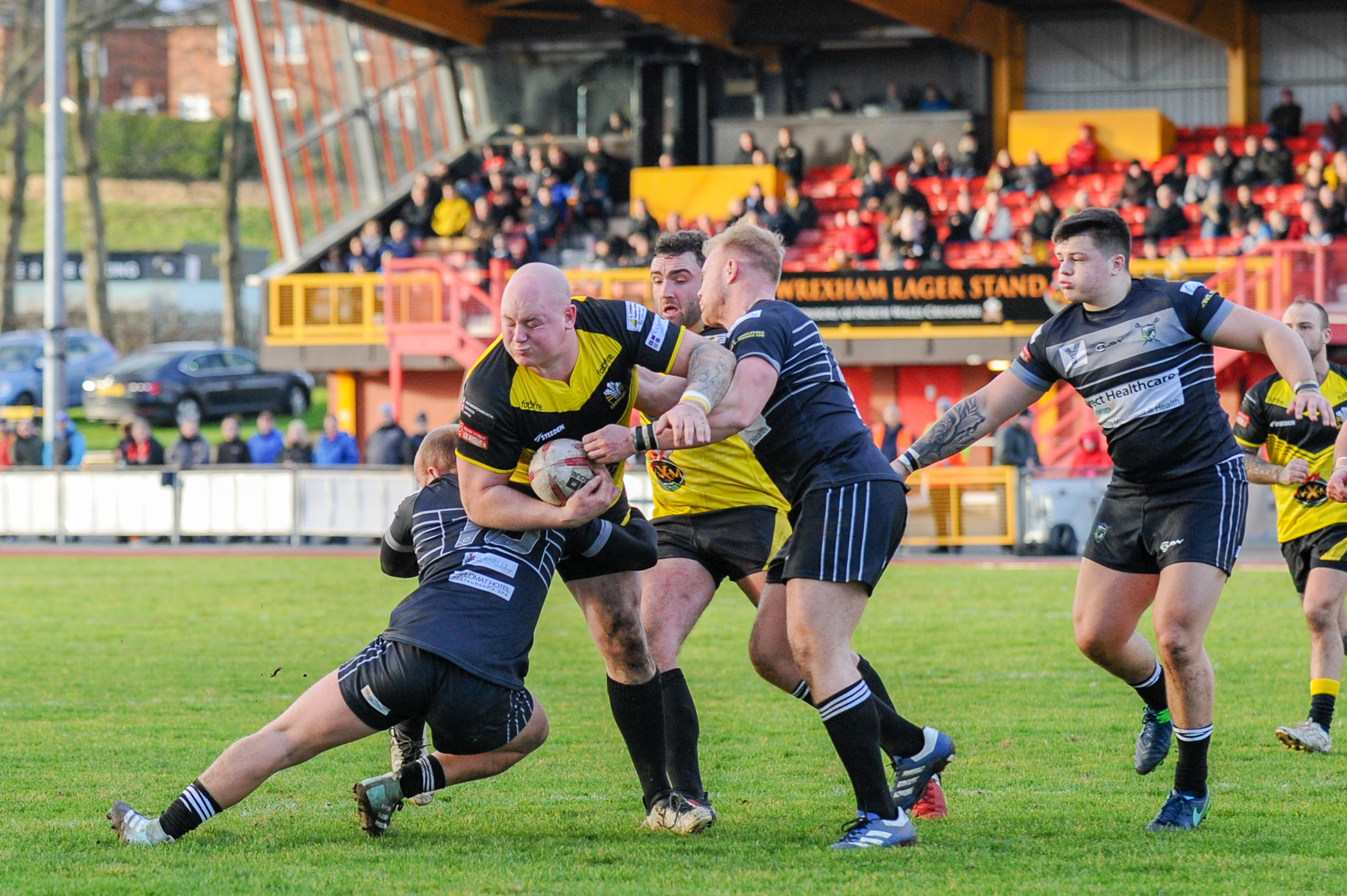 Currently we have two sides in national professional competitions – North Wales Crusaders and West Wales Raiders. Click on the links on their names for their official websites.

We are working on listing every player to have turned out for a professional club in Wales. Please click below to see the records we have so far. Records are normally updated post-season. When viewed on a mobile, it may be best to go landscape.

The formation of the Northern Union in 1895 was the culmination of almost 20 years of divisions within rugby football. The determination of the south of England establishment to keep control of the game and hold back its development in working class communities in the industrial north had seen suspensions of clubs and players for alleged breaches of the game’s rules on professionalism. The RFU refused to accept the idea that players should have the right to claim “broken time‟ payments to cover loss of Saturday morning earnings when travelling to play for their clubs. The leadership of the RFU was also determined to stop commercial development of the game, and opposed competitions such as the Yorkshire Cup, which attracted huge crowds, and the development of leagues in Lancashire and Yorkshire. Similar breakaway factions occurred from RFU-aligned rugby unions in New Zealand and Australia in 1907 and 1908 respectively, and formed associations known as “Rugby Football Leagues‟. The Northern Union later changed its name to the Rugby Football League in 1922 and thus, over time the sport itself became known as rugby league. Over the following decades, the rules of both codes of rugby were gradually changed, and now rugby league and rugby union are distinctly different sports.

In the Northern Union, the first minor rule change, awarding a penalty for a deliberate knock-on, was introduced in 1897. The line-out was also abolished and the value of all goals were reduced to two points. Nine years later, the number of players on each side was reduced from 15 to 13 while rucks and mauls after a tackle were replaced by the play-the-ball. All these rules were designed to make the game faster and more attractive to watch. This was important for the Northern Union clubs, who had to pay their players, maintain their grounds to accommodate large crowds, and fight off the rise of association football, which was competing for their supporters.

One reason that Northern Union rugby didn’t take off immediately in Wales is that the English Rugby Football Union turned a blind eye to Welsh clubs paying their players (an act known as shamateurism) otherwise they knew that rugby union would be destroyed in working class Wales, which would put a huge dent in the international game. At the time, the Welsh didn’t care which organisation they played under because both games had the same rules, but it was obviously far easier to carry on playing against Welsh clubs and to pay their players.

Had the RFU not turned a blind eye then it is likely that Wales would have turned to Northern Union and had the RFU lost rugby in South Wales, and the south west of England, which had close links with the game in Wales, they would have been left controlling a rump primarily based around London.

A key incident was the Arthur Gould affair in 1897. The Welsh rugby international had a testimonial awarded to him in the previous year and was awarded the deeds to his house (but no actual money). The RFU declared Gould a professional and then banned all clubs and players from playing against him. Because of this, in February 1897 the Welsh Rugby Union withdrew from the Rugby Union International Board and was ready to join up with the Northern Union. But by August a compromise was reached as the RFU realised that their control of rugby was at stake. They continued to ignore the payments issue until top player Dai Jones publicly walked out on Aberdare to rejoin his native Treherbert because he wasn‟t getting enough money. Half of the Aberdare committee were banned and formed the Merthyr and later Aberdare Northern Union clubs.

Merthyr Tydfil and Ebbw Vale formed for the 1907-08 season but they didn’t last that long. The Merthyr club disbanded in January 1911 due to constant financial losses and a reported lack of assistance from the Northern Union while Ebbw Vale lasted until the end of the 1911-12 season before going out of business. Clubs from Aberdare, Barry, Treherbert and Mid-Rhondda all switched to Northern Union in 1908 and entered the league and Challenge Cup but none of them lasted more than two seasons for the same reason as the initial two clubs and soon collapsed, with the exception of Mid-Rhondda, who turned their efforts to professional association football. The very first Welsh League was formed in this period. There were six teams in the 1908-09 season but just three a year later. The Northern Union presented the League with a cup, valued at 50 guineas, for the Welsh champions, which ended up being Ebbw Vale in both seasons.

There was one attempt at a Welsh League XIII representative side and it was very successful as they beat the touring Australians 14-13.

Other club attempts in Wales during the first 100 years of rugby league were few and far between. There was a team in Pontypridd, a different organisation to the rugby union club, who played from 1926 to 1927 at Taff Vale Park. Launched in the aftermath of the General Strike, and with the miners involved in industrial action, it is hard to think of a worse time to launch a new club. This side was even complemented by an amateur league that played until 1930. Glamorgan and Monmouthshire competed in the County Championship from 1927 to 1931.

In 1951-52, following a successful stint in the new Welsh League, Cardiff was elected to the Rugby Football League. However, after one disastrous season with low attendances, the club withdrew from the League.

Cardiff City Blue Dragons were then formed in 1981, a club run by the same owners as the famous football club and also playing at Ninian Park. They ran for four full seasons, from 1981 to 1985, and this was probably the most ambitious and successful out of all the attempts to bring professional club rugby into Wales. While the other clubs had generally failed due to lack of finances, lack of support from the governing body and travel hardships, Cardiff City had none of these problems. Their difficulty was keeping their attendances when the results started to go awry. After City chairman Bob Grogan died the other directors pulled the plug. For their final season the team moved to Bridgend, and struggled to field a competitive side.

The final professional rugby league club in the 20th century was South Wales RLFC, who finished sixth in the Second Division in 1996. Games were played at Talbot Athletic Ground Aberavon, one game was played at Morfa Stadium Swansea against Bramley RLFC and all the games for the second half of the season were at Cardiff Arms Park. The first home game played at Aberavon on 31st March 1996 saw an attendance of 1,876, when the club played Hull Kingston Rovers. Unfortunately for South Wales they lost 70-8. Crowds fluctuated depending upon where the club played, and the last home game of the season saw a crowd of only 400 witness the club defeating York RLFC 20-16 at Cardiff Arms Park. Due to the reasonable success of the club and their geographical location the club had high hopes that it would be awarded a Super League franchise. A case was put forward and although it was accepted by the RFL, it was rejected by the existing Super League clubs. As funding for 1997 was based on only being in Super League. the decision was made to disband the club before the start of the 1997 season.

In 2006 a new professional team, Celtic Crusaders entered National League Two. After the South Wales RLFC club was wound up, rugby league continued with the introduction of Cardiff Demons in 1997 who played four seasons in the Senior Academy alongside teams from professional northern clubs. The Demons reached the Grand Final of the Academy Division Two in their second season but lost to Hunslet Hawks. They also had a successful Challenge Cup run in 1999-2000 where they knocked out Durham and Rochdale Mayfield before losing to Keighley Cougars. The club then transferred to the Rugby League Conference and their continued success inspired more clubs from around Wales to form. Bridgend Blue Bulls were the most successful of these with Celtic Crusaders being based in Bridgend, being the next natural step.

With continued good support, Celtic Crusaders achieved promotion to National League One in their second season in 2007, then in 2008, they submitted an application for Super League and were accepted. After an unsuccessful first season on and off the field, the club was moved lock stock and barrel to Wrexham and dropped the Celtic from their name. After appointing Brian Noble as coach and Iestyn Harris as assistant, they reached the play-offs for the first time in 2010. Noble left at the end of the season but there were high hopes for the club for 2011 after Welsh coach Harris was promoted to the vacant role. His tenure lasted just one season after the club was wound up following their withdrawal from Super League and finishing bottom again.

However thanks to initiative from a consortium of businesses in the area, North Wales Crusaders were formed for the 2012 Championship One season and achieved promotion at the second time of asking when coached by former Wales boss Clive Griffiths. Only a restructure saw them relegated again the year after. The club have developed players through youth and community set-up and, in addition to their Championship One title in 2013, have won the Northern Rail Bowl and League One Shield.

The development work for young Welsh players continued in South Wales leading to the formation of new professional club South Wales Scorpions who entered the Championship 1 league in 2010. The majority of their players were Welsh born. The Scorpions reached the play-offs in their inaugural season when coached by future South Sydney Rabbitohs boss Anthony Seibold, the development continued at both senior and junior level and the club fielded or developed over 30 full Welsh internationals. The club were bought by West Wales Raiders in 2017 and closed down at the end of that season, with Raiders taking their place in League 1.