Bridgend Blue Bulls and Aberavon Fighting Irish meet in this weekend’s only men’s semi-final (Pyle RFC, Sunday, 2.30pm) as they compete to meet Rhondda Outlaws in the 19th South Wales final in a fortnight.

It’ll be the third meeting this season between the two sides, with Bridgend taking the first game 38-26 in Pyle in June, with a 24-all draw following last month.

History is also behind Bridgend as well. The Bulls, who were last year’s champions, beat Aberavon in the first two Grand Finals, back in 2003 and 2004, plus Aberavon have only overcome the Bulls once in their history. However the Aberavon head coach Richard Lewis is hoping that this history won’t go to form.

He said: “We are delighted to be playing our old adversaries in this semi-final playoff. Our rivalry, friendship, and respect for each other’s efforts, goes back over two decades. During that time, we have failed to lower their colours, but our hard-fought draw earlier in the season has encouraged us to believe that on our day, we can end that sequence, and progress to the Grand Final.

“However, to do that we must be on our very best form and many years of hurt and near-misses has taught us that the Bulls are never beaten until the final whistle sounds.

“Whatever the outcome this has been a fantastic year for our club.  It has been 17 years since we last had an Open-Age team in the league and the way that our boys have developed and bonded as a very tight unit, has been a joy to behold.”

Bridgend coach Marcus Thomas said: “We are looking forward to the weekend’s game against Fighting Irish. We haven’t had a game for two weeks so the boys are ready to go. It’s going to be a hard game just like the past two against them, but I’m confident we can come away with the win and go on and defend our title in the Grand Final.” 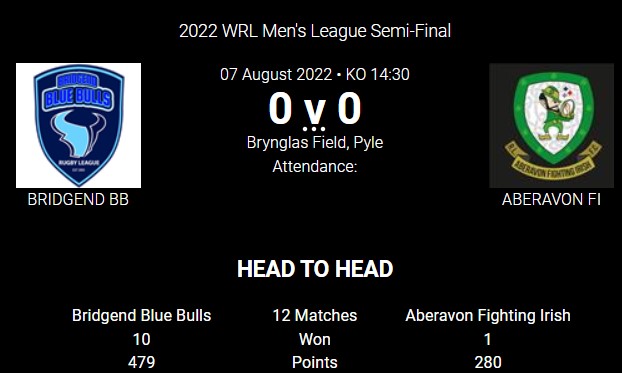 Junior Semi-Final fixtures, to be played on August 7 unless stated, are as follows…