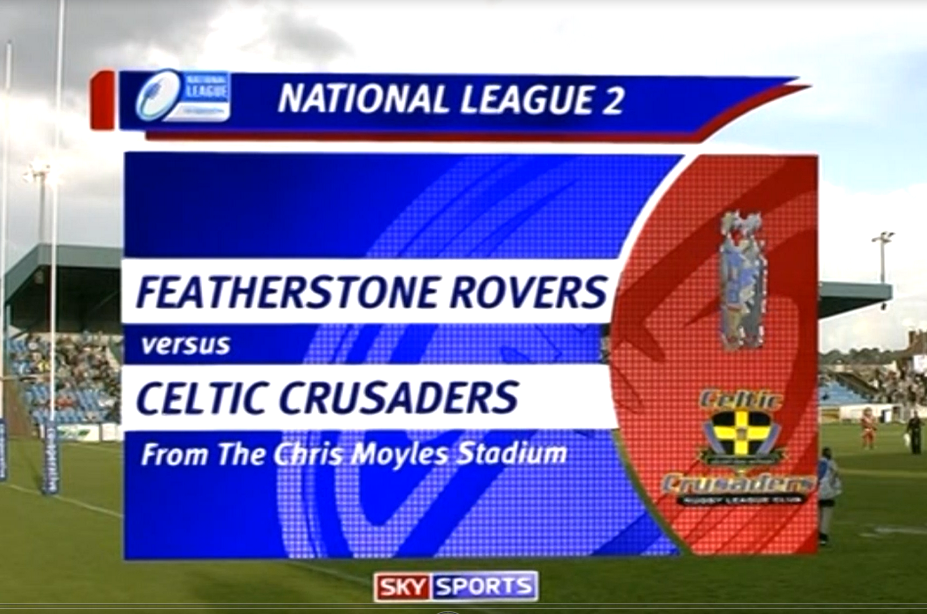 That first sounds like a run of the mill game, but it put the Crusaders just two points behind Featherstone at the top of NL2 (now League 1) with a game in hand and six games remaining.

It meant that if Celtic Crusaders won all their remaining league games, they would be promoted to NL1 (now known as the Championship), which as we know from history, they did just that. They overcame all opposition and could have been considered to be the Toronto Wolfpack of ten years ago.

Had they lost that Featherstone game, they wouldn’t have gone into their next game against Barrow with such momentum and may not have won there. Featherstone Rovers probably would have finished top and Crusaders would have gone through the play-offs and who knows what would have happened there?

So why was this so important in the recent history of Wales Rugby League?

Well if Crusaders hadn’t been promoted that year to NL1, they wouldn’t have been able to apply for a Super League licence and the club wouldn’t have continued in the momentum that it did.

Here’s the important bit – when Celtic Crusaders were promoted, they had enough money to form an academy and run junior sides. If they hadn’t had been promoted, those junior sides would not been formed, at least at the time they were, and it’s unlikely that we would have seen the talent that could be in Wales’ World Cup squad for this year, if indeed we had even qualified for this year’s World Cup.

The 2007 Welsh national side wasn’t in the best of states. A loss to Scotland at home in 2006 meant that they needed to pull something out of the hat to qualify for the 2008 World Cup in Australia. For a number of reasons that only those involved in the Welsh camp will know, Wales suffered a humiliating play-off defeat to Lebanon in Widnes to go out of the tournament.

At the 2000 World Cup, Wales coach Clive Griffiths complained about the lack of players coming through the system and had to call on two former internationals in John Devereux and Paul Moriarty, to make up the numbers in the final two games of that competition. He called for a rebuild.

That rebuild had sort of already started with the Cardiff Demons side who were in the RFL Academy leagues. From that side, an open-age outfit was formed and they had a good Challenge Cup run in 1999-2000 before entering the South of England Conference. Then in 2003, the Welsh Conference was formed. Now known as the Premier League, it’s still running now with similar teams involved.

Bridgend Blue Bulls were forerunners of that competition and from their success, the momentum was there to form a professional club in Celtic Crusaders who started in 2006.

However it wasn’t enough time to build a proper Welsh side for the World Cup qualifiers. That line-up contained a number of great heritage players who had pride in the shirt and would go on or continue to have a fantastic career with Wales. Names like Damian Gibson, Iestyn Harris, Lee Briers, Craig Kopczak, Ian Webster, Jordan James and Phil Joseph stand out.

Our current Wales head coach John Kear said just this week: “I get a real buzz of coaching Wales. They are a true international side. The vast majority are Wales born through and through and have come through the system. But there’s a massive pride in the players who qualify through heritage. We’ve made sure the good attitude is with everyone, even the overseas players. When we’ve chatted, we’ve made sure that it really means something to them and they’re proud to represent their parents and grandparents.”

But with Gareth Dean being the only Welsh-born player in the 17 that evening in 2007, something had to be done. It was to be Dean’s last Welsh outing, along with Harris. Six others players who weren’t mentioned above also never played for Wales again.

So, following promotion for Celtic Crusaders in 2007, a reserve or “Colts” side was formed, playing in the highest ranked summer community league at the time, the Conference National, with an under 18 side then coming along in September 2008, playing a winter season in a similar competition, the National Youth League. Both leagues are much missed.

And did Celtic Crusaders go onto win both of these? They certainly did. A Grand Final win for the “Colts” side in 2008 was followed by a memorable day for the under 18s months later.

Six of those mentioned in the last paragraph are in John Kear’s train-on squad for the 2017 World Cup that was released last week. And in total, from the 38 players named, exactly half started off in South Wales, most as a direct result of the youth development since 2008.

Had it not been for Celtic Crusaders’ win over Featherstone Rovers ten years ago, and their subsequent promotion, those two matches would not have happened and it’s a strong possibility that many of those players may have gone to rugby union and not pulled on a Wales RL international shirt.

So sit back and enjoy the match that arguably went a long way to building the Wales side that we have today.