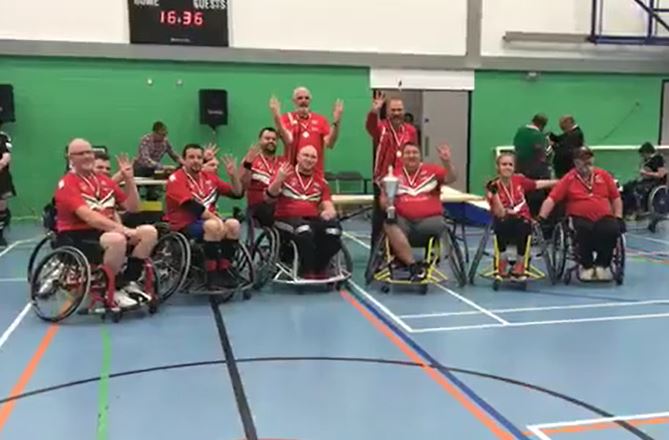 Wales Wheelchair claimed their fourth Rugby League Celtic Cup title in as many years after easily seeing off Scotland and Ireland in Halifax on Saturday.

Like in previous years, it was a three-game one-day tournament, all 80-minute matches.

Wales’ two victories means that they still have a 100% record in the competition with eight wins.

With half an hour gone, Ireland were 38-8 up and cruising. Seb Groves scored four of their tries with Stuart Walker, Steve Argent and Ben Hope adding one each. Tony Godward converted five of them.

Calum Young and Rob Hawkins each scored two first half tries for Scotland with Calum Young converting just once.

Scotland pulled it back to 38-32, then Ireland scored again through a Godward try, before Scotland scored a further 20 unanswered points to claim a dramatic win.

Hawkins added five second half tries to take his total game tally to seven, whilst Jay Anderson and Gavin Dobson each claimed one. Young added two further conversions and Hawkins one.

Scotland had the last score of the half through a Rob Hawkins try, but couldn’t make another comeback.

Wales continued to run riot in the second half as Alan Caron picked up a hat-trick, Jones and Trig-Turner, who also punched four conversions, each added two tries with Williams and Gary Taylor each scoring one. Taylor and Phil Davies punched one conversion each.

Wales were 66-8 at half-time against Ireland, eventually winning 109-8.

Ireland could only reply with a brace of Steve Argent tries in the first half and didn’t even get over the line after the interval.

It was all Wales in the tournament’s final 40 minutes. Trig-Turner added two more tries and five more goals. Gary Taylor also scored another couple, with Stuart Williams and John Doyle each adding one. Harry Jones rounded off the day by punching a drop-goal.

To view all games in full, go to https://www.facebook.com/pg/WalesWhRL/videos/