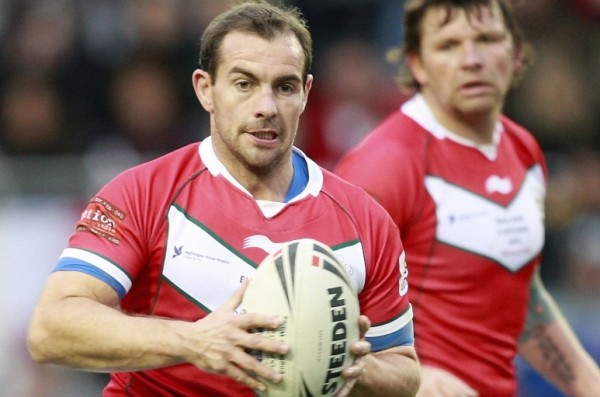 Blwyddyn Newydd Dda pawb. 2013 is finally upon us, which means Rugby League World Cup is most definitely on its way, and I hope all you fans are as excited as me!

Watson, or Watto as he is affectionately known, has been in the game for 17 years and holds a record 31 international caps for Wales, the first of which was presented to him by Crusaders’ coach Clive Griffiths when he was coaching the national side.

This is why he approached the North Wales club to take part in his celebrations. “Playing for Wales has been a massive part of my career and it was Clive who got me started so it seemed appropriate to invite his team down for my testimonial game,” he said.

There was a real family atmosphere at the ground, which was another of Ian’s stipulations. He added: “I remember playing at big grounds when I was a kid, dreaming of becoming a professional rugby player.” So junior teams from Eccles, Folly Lane, Langworthy Reds and Westhoughton were invited to take part in a tournament, on the main pitch, before the main game and at half-time. Langworthy Reds came out winners and had a medal presentation from ex-Wigan and Great Britain star Andy Gregory.

Crusaders put in a spirited performance against a sharp and clinical Swinton side, with tries from Andy Gorski, Rob Massam and Toby Adamson. The Lions came out on top, however, with Watto pulling the strings, as usual, from scrum-half.

The final score was 34-14 but this was irrelevant really, as there was only ever going to be one winner – Ian Watson. He was applauded off the field by players and fans from both sides.

Griffiths paid special tribute to Watson in a gathering of supporters, players, club officials and the testimonial commitee after the game. “It’s great to reward Watto for his brilliant career. As soon as he asked me to help out with this game, I didn’t hesitate. I’ve followed him in his career wherever he has gone. I am proud to call him my mate”, said Griffiths.

Watto said of the successful afternoon: “Thanks to everyone for coming, and thanks to both coaches for putting strong teams out to compete in the game. When I started my testimonial year, I wanted it to be family-orientated so to have the kids tournament before the game was brilliant, as that’s what it’s all about. And, finally, a massive thanks to the Crusaders lads for playing today.”

I managed to grab a few words with Ian after the game, asking him what he plans to do next. He certainly has no plans to hang up the boots just yet, aged 36, and will just take each season as it comes. “As long as I can do a job I will carry on but my plan is to go into coaching and I’m close to completing my coaching badges” he said. He is very excited about this year’s World Cup and impressed with the way Wales RL is moving forward, with improved facilities and promising youth players coming through the ranks.

As your fans’ representative, I urge all supporters of our wonderful game to pull together and make RLWC2013 huge, it won’t be easy to fill the Welsh stadia and will take some serious teamwork, but if we work hard, share our ideas and pool our insatiable enthusiasm, I know we can pull it off!

Don’t just sit back and think ‘why aren’t they doing it this way’ – shout out loud, all views and opinions will be welcomed and listened to, this is our game, our country and our World Cup!

Feel free to tweet your thoughts at me @JacWak20 Remember, too, that you can really be a part of Wales Rugby League at RLWC2013 by joining Team Wales and having your name on the front of the national jersey. See this website for details.

I look forward to working with you all this year.