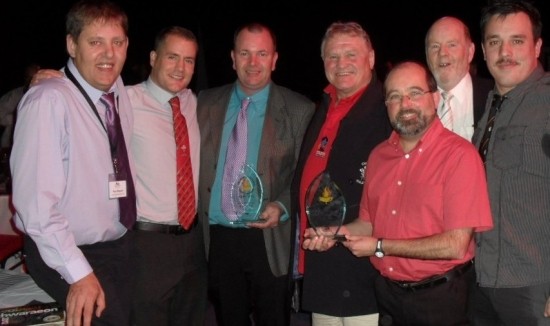 CONWY CELTS head coach Ray Caldwell was taken aback when his name was called out to receive his local council’s Sports Coach of the Year award.

Caldwell knew that the Celts, who won the North Wales Grand Final this season after beating Rhyl and Prestatyn Panthers, had been nominated for the Sports Club of the Year in their locality – but everyone had kept quiet that he was also going to receive a trophy.

So, in the presence of Wales Rugby League president Mike Nicholas and his club-mates, Caldwell was called up on stage to take his trophy and with it, he hopes, put rugby league on the map in Conwy.

The coach said: “It’s amazing, to be honest. I am still on cloud nine. It was completely unexpected. As a team, when they awarded us the award, we thought ‘Job Done’ and really good for rugby league and for Conwy Celts, then my name came up.

“This is Wales’ fastest growing sport and so for Conwy Council to recognise the hard work that’s been put in by everyone is fantastic.”

Although the Celts were formed back in 1996/97, it was not until last year and the formation of the North Wales Conference that they really came into their own.

“After the Grand Final win, one of the officials was overjoyed and now the lads are already asking when training will start for next season.

“And we will be defending our title (winning it). Last season, we had 30 players registered in total and it gives you a great selection headache when you have those sort of numbers.”

One of the Celts has also gone onto become a Welsh international cap this season. Teenager Jordan Sheridan played against Scotland and England in November and had a taste of the really big time on Wednesday November 28 when he lined-up for Wales against the Australia Institute of Sport XIII at The Gnoll, Neath.

Caldwell added: “Fair play to Jordan, he is still fairly new to the game but to play against teams like Scotland, England and then the Australia Institute of Sport is really good. It shows that the opportunities are there for you if you want them and the player pathways are in place.”