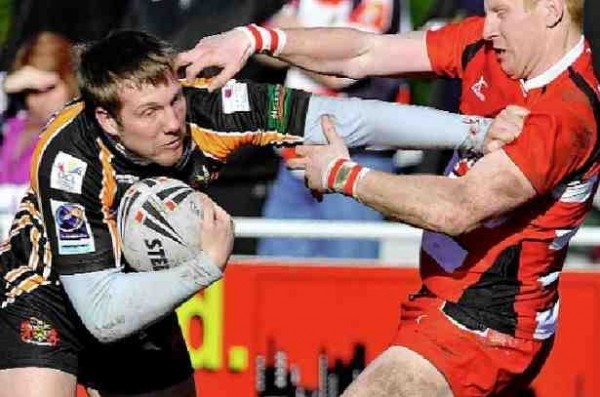 There will be no Super League side at Glan-yr-Afon Park this year. Blackwood Bulldogs played with pride throughout the entire game at Oldham on Sunday and can hold their heads up high for reaching the Third Round of the Carnegie Challenge Cup in the first place.

The Welsh Champions beat Edge Hill and Edinburgh to qualify for this game against the Co-operative Championship One side and will go away with a lot of lessons learnt.

Blackwood impressed everyone present by their attitude and determination, and the Wales Conference Premier competition can also certainly be proud of their representatives’ non-stop commitment, even though the part-time professionals inevitably had too much power and pace for them.

The one Bulldogs try came early in the second half. Lloyd’s high restart kick after half-time enabled the Welshmen to regain possession and stand-off Kristian Perry made an excellent midfield break before sending full-back David James under the posts. Gareth Price added the goal.

James, soon to be joining South Wales Scorpions, pulled off several try-saving tackles as well as scoring his side’s only try and coming desperately close to going over again after a length-of-the-field dash.

He was eventually hauled down just short by the chasing Onyango, but this was neither the first nor the last time that James demonstrated why the Scorpions were keen to see him in action for them in Co-operative Championship 1. Without his efforts, the score would have reached treble figures.

With eight minutes to go in the game the score was 56-6, but that was then the difference between a side from Championship 1 and Conference Premier showed, the home side scoring four tries in quick succession as Blackwood, who had to field a number of players who had played rugby union 24 hours earlier, were dead on their feet.

Their pick of the bunch was their 12th try in the 72nd minute, scored by Chandler but made beautifully by centre Fogerty and his winger Brocklehurst.

Blackwood had one final lesson to teach their betters – how to retrieve the ball from the kick-off. Gutsy Blackwood scrum-half and captain, the 37-year old Jeremy Lloyd kept on chipping his restart kicks just over the 10-metre line, and his forwards regularly competed well enough to win it. Indeed one of the biggest cheers of the afternoon was reserved for the occasion, five minutes before the final hooter, when Oldham managed at last to gain possession from one of Lloyd’s kicks!

Talking about Lloyd, who is also Blackwood’s rugby union coach, Bolldogs coach Alex Borghese said: “The ‘Little General’ put up the ball ten times from restart kicks and we got it back eight times. It was something that we thought Oldham might not expect and a tactic that we could exploit to our advantage.”

“I was proud of the boys,” he added. “Just to get to this stage of the competition was a fairytale for us. We were only formed four years ago and just to be playing in the Carnegie Challenge Cup as Welsh Conference champions is a dream come true.

“A lot of the boys played rugby union yesterday and then we had the long journey north before taking on a very good Oldham side. We did as well as we could do in the circumstances. I couldn’t have asked for more.”

The fourth round draw of the Carnegie Challenge Cup takes place in Warrington on Monday evening and whilst Blackwood’s adventures are over, this is where Super League side Crusaders enter the competition as the road to Wembley continues.

Highlights of Blackwood’s third round exploits can be seen on The Super League Show on BBC1 next Sunday.

GAMESTAR: Matty Ashe was a constructive linkman for Oldham all afternoon, as well as accumulating 28 points himself.

GAMEBREAKER : The outcome of the game was decided by the 11th minute, when Oldham scored their third try of the afternoon.