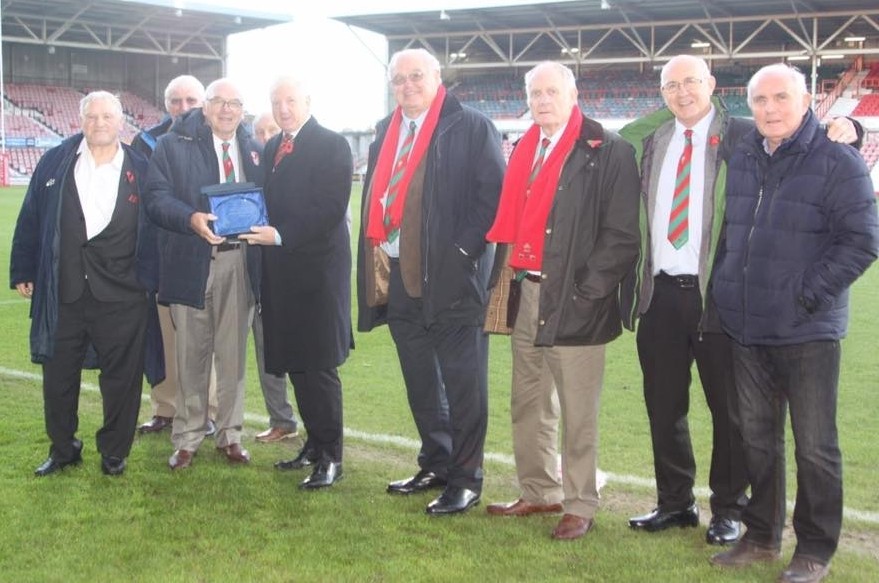 Kel Coslett has become the fifth player to be inducted into the Welsh Rugby League Hall of Fame.

He follows Billy Boston, Gus Risman, Mike Nicholas and David Watkins who were inducted over the last few years.

The presentation occurred at half-time of the recent Rugby League World Cup qualifier between Wales and Ireland which Wales won to qualify for the 2021 tournament.

Many of his former team-mates, plus former WRL internationals from many eras, were there to witness the presentation, some of whom were on the pitch with WRL chairman Brian Juliff, who made the presentation.

Juliff said: “Kel was chosen because of his outstanding contribution to WRL as a player and coach.

“He is a living legend of the game and hugely respected not only at St. Helens but across all the clubs in Rugby League. His points scoring record is quite amazing and he is recognised amongst the top 10 of all time.

“He was thrilled to be inducted into the Hall Of Fame and accepted the honour in his own inimitable and humble way.”

Coslett, who was awarded the British Empire Medal in the Queen’s Birthday Honours List for services to Rugby League in 2014, was a player and coach for Wales in rugby league, the latter from 1978 until 1981.

Hailing from Bynea in Carmarthenshire, he played for Llanelli and Aberavon in rugby union and won caps against England, Scotland and France in the 1962 Five Nations Championship, but it’s in Rugby League where he became famous after moving north to join St Helens later that year.

He had 15 seasons at Knowsley Road and was an outstanding goalkicker landing 1,639 in his Saints career and scoring 45 tries for the club. He skippered the team to Challenge Cup Final wins at Wembley in 1972 and 1976 and still holds the club record for most appearances and points.

He left to become player-coach of Rochdale Hornets in 1976, went on to coach Wigan for the 1979-80 season before returning to St Helens, coaching them for two years between 1980 to 1982. He is now St Helens’ Gameday Manager and life president of the club.

Internationally in Rugby League, Coslett was WRL heritage #254, won 13 caps between 1963 and 1975 and was famously in the Wales side that beat England 12-7 in the 1975 World Cup in the Battle of Brisbane, a match that eventually cost England the title.

He is one of less than ten Welshmen to have scored more than 2,000 points in their rugby league career and with 3,545 points is seventh on British rugby league’s “most points in a career” record list behind Neil Fox, Jim Sullivan, Gus Risman, John Woods, Cyril Kellett and Kevin Sinfield.

Coslett said: “I’m delighted to have been recognised in this way by Wales Rugby League especially as it was on a big day for Wales and accompanied by many of my friends and former team-mates.”