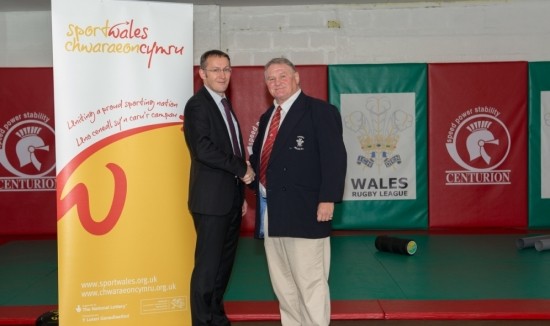 Since the WRL officially opened the facility in May, the North Wales Crusaders Under-18s have developed and training at the performance base, there have been two coaching workshops with over 50 people in attendance, the Wales international squad train there and now the North Wales Under-14s have had their first session part of a 20-week programme developing core skills.

The Under-14s, after their two ten-week blocks, will showcase their skills in an Origin Series against South and West Wales U-14s,while the Wales wheelchair international squad who will be competing in the World Cup next year, had their first session.

“We’ve worked closely with Flintshire County Council and Wales Rugby League to establish a facility that will benefit not only the players of today but that will also support the talented players emerging from across North Wales for years to come. It’s a fantastic step forward for the sport in Wales and we look forward to seeing the Elite Performance Centre go from strength to strength.”

Wales Rugby League North Wales Development officer Matt Pritchard said: “Thanks to Sport Wales and the support from Matt Hayes, Flintshire County Council Sport Development Manager, alongside Jeff Shields, Deeside Leisure Centre facility manager and Sian Williams, Operations Manager, this partnership has provided Wales Rugby League with the all in one facility we have needed and is a huge step in our development as a nation.

“It’s important we have everything in close proximity and everyone from Wales Rugby League who comes here feels part of the facility and knows its our elite performance base, It further highlights an innovative approach to facility development and showcases best practice in partnership development”.