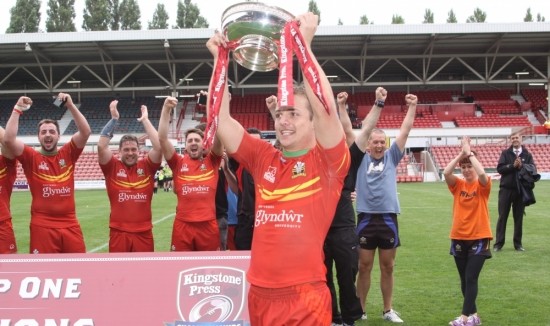 The 35-22 victory was full of drama throughout and ended in celebrations not seen in Wrexham since the old Crusaders club qualified for the play-offs.

“I’d like to send my whole hearted congratulations to North Wales Crusaders for their Championship 1 title win,” Thair said. “It’s a fantastic achievement especially as they’re only in their second season as a club and they’ve echoed the old Celtic Crusaders with this triumph.

“A big well done to Clive Griffiths and his players and also to Jamie Thomas and the backroom staff for the excellent job they’ve done in keeping Rugby League in North Wales alive when it could have just disappeared after the old club were pulled out of Super League.

“I was pleased to note that the Crusaders have announced a new junior set-up to complement the existing success in South Wales. Good luck too with that and it’s great to see that there are plans to safeguard player development throughout the country.

“It has been an outstanding year on the field for Rugby League in Wales at all levels and we’re now looking forward to co-hosting the World Cup.”