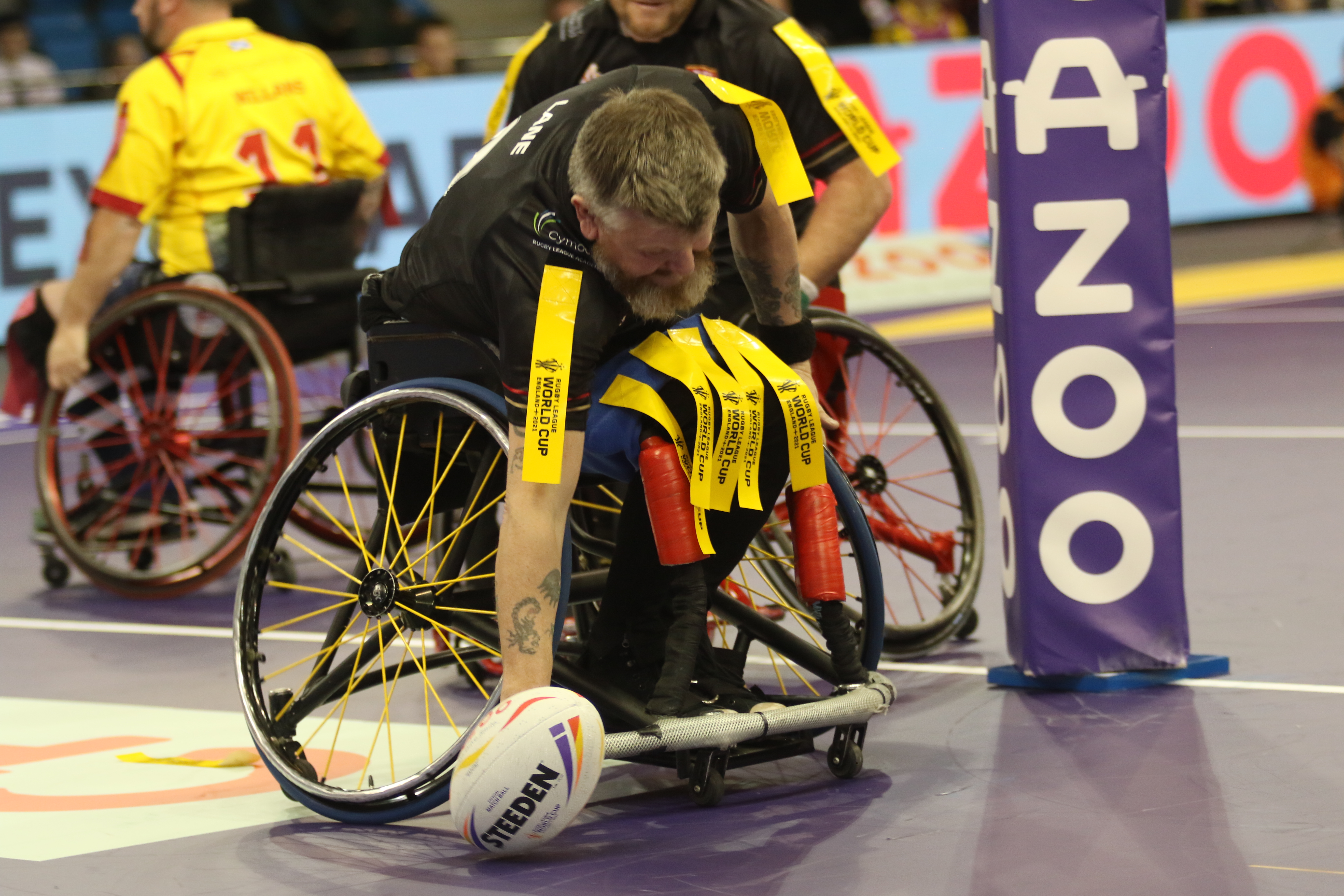 Wales have qualified for the Wheelchair World Cup semi-finals after beating Scotland 70-36 in Sheffield on Thursday afternoon.

The Welsh will now take on hosts England at the same venue on Sunday afternoon (kick-off 2.30pm).

In the last meeting between Wales and Scotland, which was in this year’s Celtic Cup, Wales won by a team and tournament record 116-6, but this game was always going to be tougher.

Wales won a goal line drop out from their kick-off, and they took advantage as Scott Trigg-Turner scored the first try, which brought him up to 250 points for Wales, with Andrew Higgins converting.

Some good passing resulted in Wales’ second try on five minutes with Gary Preece scoring in the corner, that took him to over 100 points for Wales, and Higgins converting.

However Scotland weren’t going to take a beating easily. A Dan Grant try and John Willans goal brought the score back to 12-6.

Wales extended their lead on 12 minutes. Trigg-Turner leapt on a grubber and Higgins converted.

An outstanding Jodie Boyd-Ward catch led to a fourth Wales try. After she grabbed a tough aerial kick, the resulting set led to a Higgins try and goal. Wales were 24-6 up on 17 minutes.

After Wales were forced to make changes, Scotland got back into the game. John Willans saw a gap on the wing to ground. Michael Mellon soon followed him over but neither try was converted and Wales still had a 10-point lead.

After Stuart Williams had recovered from his knocks, he returned to the field and another foul on him resulted in a penalty but Higgins’ kick just went wide.

However Wales weren’t to be denied. Exploiting the Scottish gaps, Martin Lane scored under the posts and Higgins converted.

And timed to perfection, just did as he did in the first two group games, four minutes after he came on as sub, Harry Jones scored a try. Higgins converted and Wales were 36-14 up.

But Scotland were sticking to their game-plan, and their team having not made a substitution in the first half. A Daniel Grant try and goal brought the score back to 36-20 at half-time.

Trigg-Turner was off due to a broken wheel and once he’d got that fixed, he was back on for the second half, where an early Preece try in calmed a few Welsh nerves. Higgins couldn’t add the extras but did follow up with his second try of his own that he duly converted to give Wales a now healthy 26-point lead.

Higgins and Trigg-Turner soon completed their hat-tricks, with Higgins converting both, before Scotland struck back with a Mellon try that Grant converted.

With ten minutes to go, Scotland proved they weren’t giving up as Grant claimed his hat-trick but hit conversion attempt hit the bar.

Higgins cemented Wales’ win with his fourth try of the game on 73 minutes. Mark Williams converted to put Wales 64-30 up.

Lane soon added his second of the game with Williams converting to bring up 70.

Scotland had the last say through a Grant try and goal, but it mattered not and Wales are through to the World Cup semi-finals.