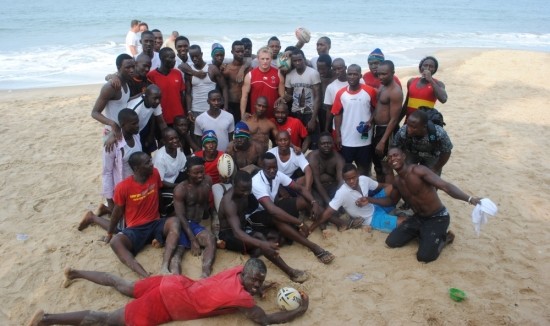 “Sierra Leone was an experience of a lifetime and the memories will be etched deeply forever,” said Jones. “From the moment we touched down we were treated like royalty. Throughout our hectic week we met so many extraordinary people whose enthusiasm for sport is unbridled and their generosity unrivalled. All the students in the schools and universities we visited are very excited about the introduction of rugby league and our trip culminated with the first session at a local beach.

“The impromptu match highlighted the talent the country possesses and bodes well for the future. After returning to Wales I felt humbled that a nation with so little was able to give us so much. The poverty in that part of Africa is evident wherever you go and the only thing holding back the development of sport is the access to facilities and equipment.”

The visit, part of the sport’s project to expand into virgin territories of the Commonwealth following recognition by the Commonwealth Games Federation in 2011, was part-funded by the Welsh Assembly’s Wales-Africa Community Links organisation and will see Wales Rugby League build a community revolving around rugby league – but incorporating education and health elements – in partnership with peer groups in the capital, Freetown.

The trip included meetings with local government officials, media and educational institutions. The delegation received the blessing of the Sierra Leone National Olympic Committee and the Ministry of Education, while the response from the local schools was extremely positive.

“We’d like to thank Wales-Africa Community Links for supporting this project,” said Kazandjian. “The sport is keen to create a cluster of West African nations and, following the first steps that have been taken in Ghana and Nigeria, Sierra Leone is a welcome addition. Mark and I met with unabridged enthusiasm wherever we went and it is now our responsibility to put together a plan that will enable a technical team to head back to Freetown to conduct training courses for the locals.

“Facilities were limited, but we were expecting that, and a number of places we visited have projects to create their own grass fields. The NOC was extremely positive about the project and we will be able to introduce rugby league in several institutions, including the one university that trains the country’s sports teachers.”

Rich in mineral deposits, Sierra Leone, rated the world’s poorest country in 2000, is recovering from a bloody ten-year civil war that ended in 2002.