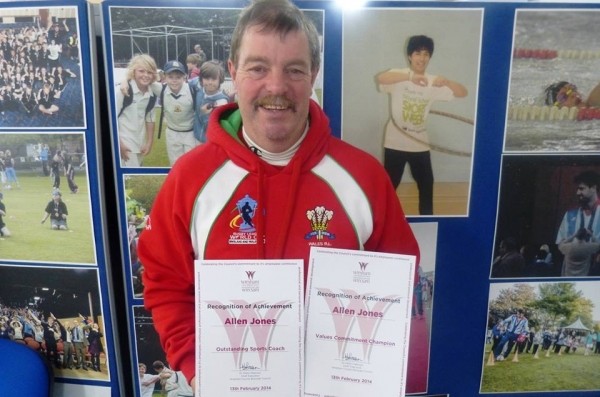 A Wrexham-based Rugby League coach has been recognised for his commitment to develop the sport in the County Borough.

He was picked up his first award in recognition of his work developing Rugby League in schools and the wider Wrexham Community. The second award saw him named the council’s Values Commitment Champion, for his work surrounding the Rugby League World Cup 2013 and commitment to the council’s values.

Allen Jones said: “Rugby League is one of the fastest growing sports in terms of development here in Wrexham and I’m delighted that the sport has been recognised by Wrexham Council.

“Without the support and efforts of a whole team of very committed people I can not do my job effectively. Wrexham Council’s Sports Development team have been fantastic and they been very supportive by arranging more and more coaching sessions for me.

The staff at North Wales Crusaders have been brilliant and the support from Glyndwr University has been first class. This has been backed up by Wales Rugby League and the local Community Rugby League clubs. I love my job and the very best thing about this recognition is that it shows that Rugby League is now making real strides here in Wrexham.

“Allen was tasked with delivering a programme of activity across the local schools within Wrexham leading up to the Rugby World Cup 2013. The level of commitment delivered on this programme was second to none, exceeding expectations in terms of the roll out of Rugby League across all school clusters and the number of participants.

“In the short space of time since Allen has been in post he has raised the profile of Rugby League as a growing sport across Wrexham due to his enthusiasm and love for the sport. We want to build a strong legacy for the sport following last year’s Rugby League World Cup and Allen’s continued hard work and commitment will go a long way to helping us achieve this.”